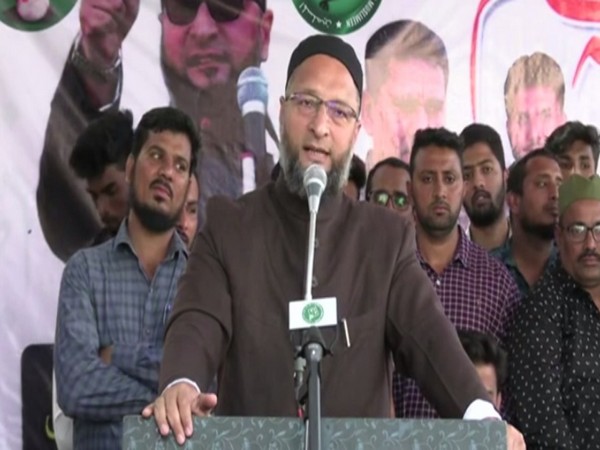 Medak (Telangana) [India], Jan 14 (ANI): All India Majlis-e-Ittehadul Muslimeen (AIMIM) chief Asaduddin Owaisi on Monday accused the Rashtriya Swayamsevak Sangh (RSS) of terming the Indian National flag as “inauspicious”.
“I want to ask BJP, isn’t it true that when the tricolour was declared as the national flag of India, the RSS organiser had written that the tricolours flag was inauspicious? I dare them to refute this fact. I will show evidence and prove otherwise,” Owaisi said at a public meeting here.
He said that the BJP and Congress had accused him of being afraid of them.
“We recently held a ‘Tiranga rally’ and more than one lakh people participated in it. They wanted to protect the soul of this country with the rally. When BJP and Congress leaders saw this rally, they said Owaisi has picked up the national flag because he is scared of them,” Owaisi said.
“I would like to say that their thinking is wrong… I am telling them the baton is ours, flag is ours and so is the nation. We had to pick up the Tiranga because those who held the flag before had Tiranga in their hands but Godse on their mind,” he added.
Campaigning for the upcoming municipal elections in the state, Owaisi said that Muslims, Dalits and Adivasis will suffer the most if National Register of Citizenship is implemented.
“When the Citizenship Amendment Bill was introduced in the Parliament, I was the one who had considered it as black law and torn a copy of the bill in the House. This law will grant citizenship based on the religion of an individual. We cannot accept it,” Owaisi said.
He advocated that people should view the newly amended citizenship law along with the National Population Register (NPR) and National Register of Citizens (NRC).
“If NPR is implemented then NRC will also happen. NPR and NRC are twins if one of them starts the other will too. There is no difference between those two. It is not mandatory that these should be together, but they want to implement both,” he said.
Owaisi also dared Prime Minister Narendra Modi to announce that the NRC will not be implemented as long as he is the prime minister. “He won’t do it,” he added.
AIMIM has fielded four candidates from Medak district from ward number 7, 11, 12 and 25 for the upcoming municipal elections for which voting will take place on January 22. (ANI)

Asif Ghafoor, known for deleting tweets and getting trolled…