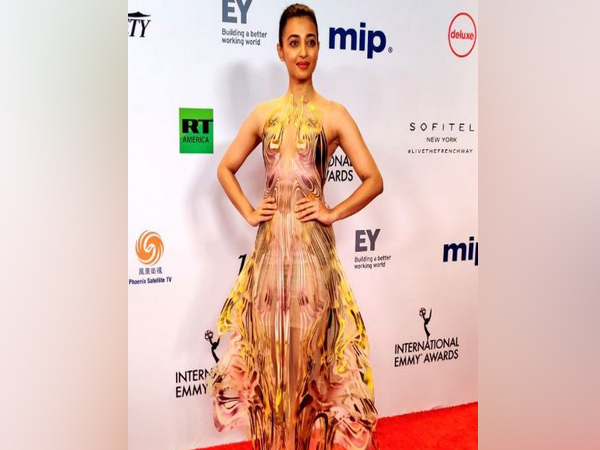 New York [USA], Nov 26 (ANI): Radhika Apte made her debut count by walking the red carpet in a breathtaking outfit.
The diva brought her fashion A-game to the gala by opting for an extravagant golden-brown see-through gown.
Keeping it summery and breezy, Radhika detailed it with low ruffles to add extra oomph to her outfit.
With her hair neatly tied in a bun, the actor kept it subtle and light with a fresh face of makeup complimenting her dress. Her bold red lips added the perfect amount of dazzle to the overall look.
The 34-year-old actor is attending the prestigious and star-studded event as she has been nominated for the 2019 International Emmy Awards under the Best Performance by an Actress category for her outstanding performance in ‘Lust Stories’.
Exuding joy over receiving the medal she posted a picture on Instagram along with the certificate.
She wrote, “Thank you @iemmys ! Every nominee was given a medal today… So honoured! Looking forward to the main ceremony on Monday!”
The actor also received a nomination medal which she flaunted a day before the much-awaited ceremony on her social media handle.
The ceremony which is to take place on November 25 (local time) at the Hilton New York Hotel, will witness three Indian projects — ‘Sacred Games’, ‘Lust Stories’ and ‘The Remix’ competing against the projects from around 21 countries. (ANI)