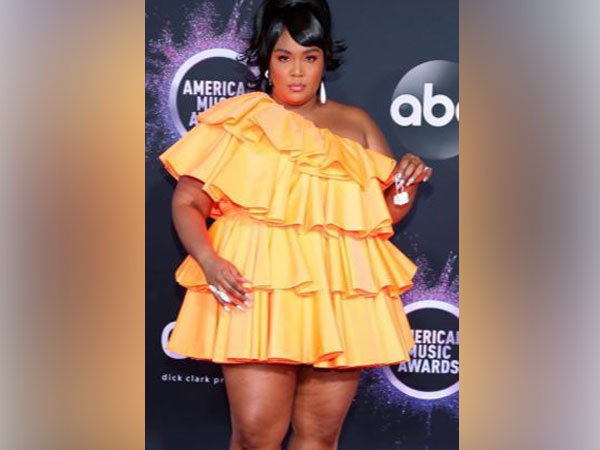 Washington D.C. [USA], Nov 25 (ANI): American singer Lizzo showed up on the American Music Awards red carpet on Sunday (local time) sporting a very tiny purse.
The 31-year-old singer shared the picture of her teeny-tiny purse on Instagram, and captioned the post as “@maisonvalentino bag big enough for my f***s to give, Big body b***h in a Valentin-HO custom look for @amas.”

The seriously small purse was true to Lizzo’s style and there was a reason for it. Clad in an orange frilled one-shouldered short dress, Lizzo’s miniature Valentino white-colored purse was truly the center of the limelight in the American Music Awards red carpet.
Lizzo was nominated for three awards, including new artist of the year.
The American Music Awards ceremony was held at the Microsoft Theatre in Los Angeles on Sunday. It celebrated music and awarded the best in a number of categories.
In this year’s ceremony artists, BTS and Khalid won a total of three awards each. Meanwhile, six-time nominee Billie Eilish won two awards at the award ceremony.
American singer Taylor Swift bagged the Artist of the Decade honor, she not only brought her American Music Award count to 28 but also became the artist with the most wins, breaking late pop icon Michael Jackson’s record. (ANI)