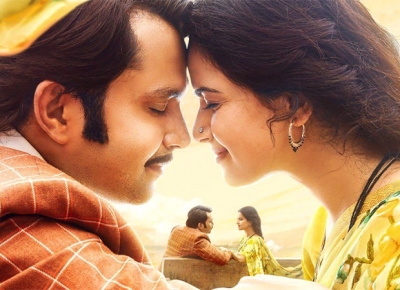 Bengaluru, Nov 8 (IANS) ‘Vijayanand’, the biopic on Padma Shri awardee Vijay Sankeshwar, the owner of the largest fleet of commercial vehicles in the country, is all set to released across the country on December 9.

The Kannada movie will release in four other languages — Hindi, Tamil, Telugu and Malayalam. Directed by Rishika Sharma, the film stars Nihal R. in the titular role.

Vijay Sankeshwar is known for his eventful journey of starting from a humble beginning to becoming the owner of the largest commercial vehicles fleet in the country. Sankeshwar also owns a leading newspaper and a news channel in Karnataka.

His son Anand Sankeshwar, who is also the Chairman of VRL group and the man behind VRL Films, said, “There were many people who approached us for the rights to make a biopic but the sincerity and the script of Rishika and Nihal convinced us that they are the right people to do justice to my father’s journey so far.”

The music of the film has been composed by national award-winning composer Gopi Sundar, while Keertan Poojary and Hemanth have done cinematography and editing, respectively.

Lot of similarities with Suryakumar, but he needs to be consistent for 2-3 years, says de Villiers

Will Smith should be forgiven for Oscar slap, says Serena Williams

Hansal Mehta’s ‘Faraaz’ to release in 100 screens in India

Railway Ministry says no safety category post will be…

Powers of Hearing: The Military Science of Sound Location

Iran’s will for agreement in Vienna proven: Raisi