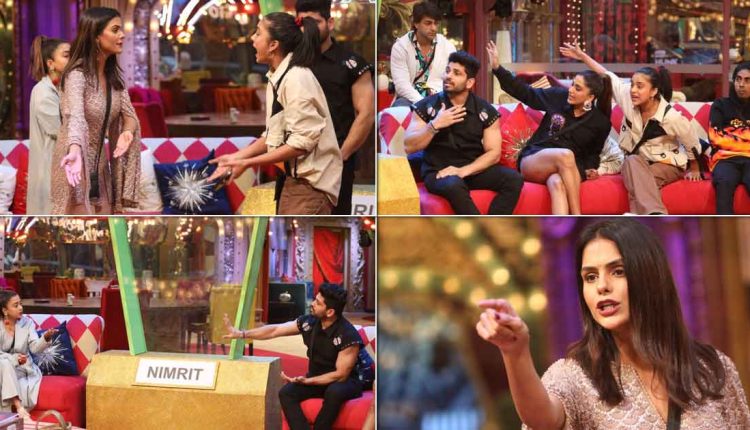 The ticket to the finale is testing the patience of all the housemates of COLORS’ ‘Bigg Boss 16’. Amid everyone’s ambition to win the season, the housemates are offered a chance to snatch captain Nimrit’s ticket to the finale with a task that involves the rest of the contestants enlisting the various incidents of violation of rules during her captaincy. For every violation, housemates will be asked to remove a ring from a rectangular board, which must hit the count of 10 rings to dismiss Nimrit’s ticket to finale.

Since the start of Bigg Boss 16, the mandali of the house made the impression that they’ll stay united beyond the show, but it seems that it is coming apart as fights are getting frequent among its members. In tonight’s episode, Nimrit Kaur Ahluwalia opens up to Shiv Thakare about her headspace when Shiv and MC Stan are talking to each other.

Her complaint is that when the two boys are chatting they don’t realize that she’s saying something. MC Stan joins the conversation and Shiv invites Nimrit to share her feelings with him as well. The discussion doesn’t go as planned and there’s an air of distrust and resentment between the two. Is this the beginning of the end for the mandali that stood united for so long?

With changing equations in the house, Priyanka Chahar Choudhary is seen trying to warm up to MC Stan and initiate a chat with him. Shiv Thakare chalks it up to her wanting to shine in the spotlight of MC Stan’s positive journey in the season. The rapper is clear that he has no plans of entertaining her. Only time will tell if this is Priyanka’s desperation or a genuine gesture.

The hot topic of the Bigg Boss 16 house is that Shalin Bhanot has no one to talk to after Soundarya Sharma’s eviction. The popular opinions about why housemates don’t talk to him are because he has an attitude problem, he is getting karmic payback, and he’s playing the sympathy card. In the middle of all of this, Shalin is bothered by Tina’s allegations, which are pushing him off the edge of his composure. As a result, he begs Shiv and MC Stan to nominate him so that he can get out of the house. Will his pain be dismissed as acting yet again? It’s not just Shalin, but even Archana seems to be dealing with a massive fit of rage and fear. Find out what started it all.

In a light moment, Archana takes on the role of a jester yet again. After Tina Datta is commanded to speak in Hindi, Archana wishes that for once she wants the master of the house requests her to speak in Hindi. She spits out a series of hilarious English sentences that makes everyone chuckle.

Keep watching the excitement and drama in Bigg Boss 16 every Monday to Friday at 10.00 PM and every Saturday – Sunday at 9.00 PM only on COLORS and Voot.

Must Read: Shark Tank India: Vineeta Singh, Anupam Mittal & Other ‘Sharks’ Are Themselves Facing Huge Losses In Business? Gets Called Out By Netizens

Israel and US aim to send message with record military drill

‘We will trust our processes and bring our strengths to the table,’ says Dubai Capitals’ George Munsey

Budget will prove to be a milestone in building modern India: Khattar

African swine fever vaccine to be distributed in Vietnam

Daler Mehndi, Richa Sharma and Master Salim on The Kapil…

Manoj Bajpayee Says That Tandav Controversy Was Not…

Doubt if MLA Jaleel’s PoK statement was with knowledge…