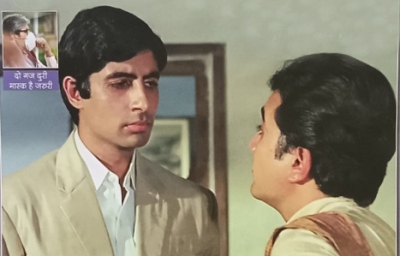 Mumbai, Dec 3 (IANS) Megastar Amitabh Bachchan was complimented by a lady over his lips on the sets of ‘Kaun Banega Crorepati’. He shared an anecdote from his film ‘Anand’, where he said that the director and DOP screamed at him for his “unusually red lips”.

Big B took to his blog and shared a still from ‘Anand’, which was released in 1971. The film was directed by Hrishikesh Mukherjee and stars Rajesh Khanna in the lead role. It also features Sumita Sanyal, Ramesh Deo and Seema Deo.

He wrote: “On the picture above a short revert .. nothing stimulating or exciting as being made out to be by some friends .. or intriguing .. just a laugh .. a dear lady commented on my lips on KBC and liked them .. ahhheemmm .. so I put this out.”

“It’s a picture form ANAND .. and I retorted to say .. my lips not now but then as seen in the picture had a story .. which wasA that my lips were unusually red, and often when I went in front of the camera , the Director and the DOP , would scream at me: ” why have you put lipstick on your lips ; who do you think you are , wipe it off ..!!! “.

Amitabh shared that he told the director he wasn’t wearing any lipstick.

“When I told them there was no lipstick, it was my natural colour, they did not believe me .. screamed at me again and asked the Make Up to wipe my lips.. The make up person came and tried , and told them what I had been saying all along that there is no lipstick on it ..”

“Defeated, the D and DOP, told make up .. put some base make up on them they are too bright, make them dull .. So Ladies and Gentlemen of the Jury, what you see in the picturea is just that – base make-up that is used on the face , rubbed onto my lips .. and That is how it has been to date .. The lips have weathered 53 years of trial and tribulations .. have withered and lost all the alip stick’ , but still draw attention .. !!! So what can one do.”

Sonam Bajwa walked the ramp for Siddhartha Bansal at LFW