Biden, Trump not on ballot, but their long shadows loom over candidates 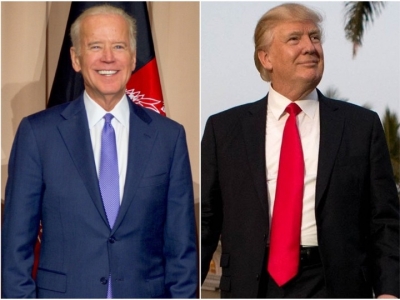 Reflecting the country’s polarisation, they are separated by less than 3 percentage points in their levels of unpopularity — Biden with an unfavourability rating of 51.6 per cent and Trump with 54.5 per cent.

And both parties seek to tar their rival candidates with guilt by association with either of them.

But there is a difference between the two leaders that matters for the campaigns: Trump’s outsize personality commands a voter base of fanatical followers and he can whip up crowds to a frenzy making him an asset in some places, while Biden has no personal following to speak of and lacks charisma.

The Democrats have made Trump the personification of what they see as the imminent danger to US democracy arising from his questioning of the 2020 elections he lost leading to the attack on the US Capitol on January 6, 2021.

And they also cite his arbitrary ways, his sometimes chaotic methods and his vicious tongue.

Biden summed it up on Wednesday, saying: “American democracy is under attack because the defeated former president of the United States refuses to accept the results of the 2020 election. “

“He has abused his power and put the loyalty to himself before loyalty to the Constitution and he’s made a Big Lie an article of faith for the MAGA Republicans, a minority of that party,” Biden said referring to the red-hatted brigade rallying around Trump’s “Make America Great Again” slogan and the former President’s claims that he had won in 2020.

Given Trump’s hold over the Republican Party and his ability to promote candidates, the Democrats see the mid-term elections as a way not only to blunt him but also weaponise him against his party’s candidates.

Similar messages are repeated in scores of contests at various levels across the country.

But if Biden appears in TV ads at all, it is in Republican ads, not in Democrats’.

NBC News declared earlier this year that according to its analysis of ads, Biden has emerged as the “top boogeyman”, portrayed as a terrifying figure.

Democrats have put a spotlight on Trump ahead of the midterms hoping his problems will reflect on the Republican candidates.

The House of Representatives panel investigating the Capitol attack by Trump supporters last year held a televised hearing that was really a professionally-produced presentation of the case against him.

It also issued him a highly publicised subpoena to appear before it.

His Mar-a-Lago residence in Florida was raided by federal agents who seized a trove of what have been described as classified documents he should not have taken when he left office.

Republicans have made the midterms a referendum on Biden’s competence, policies and ideology, and by extension Vice President Kamala Harris’s too.

Across the US, Republicans have portrayed the roaring inflation, officially in September at 8.2 per cent, but in reality higher at shop counters, as the result of Biden’s economic and fiscal policies.

And they stick it to their Democrat rivals at all levels of the election.

An ad from the National Republican Senate Committee, for example, portrays the higher costs from inflation as “Biden’s Inflation Tax”.

While Biden and Trump are both unpopular, there is a difference in their utility as vote-getters.

Trump has a fanatical base of supporters that can be mobilised to back candidates even as he is hated with equal vigour at the other end of the spectrum.

Biden does not have a similar loyal base.

He can also embarrass himself with verbal fumbles at campaign rallies as he did this week in Florida when he confused the Iraq and Ukraine wars.

Biden has kept a relatively low profile with few big rallies during most of the campaign, preferring to meet with small groups to raise funds. (So has Harris.)

To fill the void, Democrats have conscripted former President Barack Obama, who can also appeal to moderates, and he has been crisscrossing the country rallying support for his party candidates.

Even Biden is scheduled to appear with Obama at a rally in Pennsylvania this weekend.

Mirroring the situation, Trump also appears more on Democrats’ negative TV ads pillorying their rivals, rather than on Republican ads for general audiences.

Republicans in the states where Democrats have a strong presence are also wary of having Trump campaign for them because he could turn off moderates who may vote for them.

In New York, Zeldin has kept Trump at bay and instead brought in Florida’s Governor Ron DeSantis and Virginia Governor Glenn Younkin to campaign for him.

DeSantis could be a candidate for the Republican Party’s presidential nomination in 2004 and hence a rival to Trump, who had shut him out of rallies he appeared in Florida.

The sedate former Vice President Mike Pence, now reviled by Trump, has also been stumping for Republicans in some places to appeal to moderates.

Overall, though, in stark contrast to Biden, Trump has led several rallies across the US, especially in states where his party has a strong base, and is sought by candidates to rouse supporters to vote and campaign.

Trump’s role in the midterms goes beyond his campaigning to selecting candidates and it can also hurt the party.

According to Ballotpedia, which is a compendium of election information, he has endorsed 25 Senate candidates and 15 for the House of Representatives starting with the primaries — the preliminary elections in which candidates are chosen to run in the general elections.

Personal loyalty was his prime consideration and he targeted sitting party candidates who took stands against him — like voting in Congress to approve Biden’s election or to impeach him.

For example in Wyoming, he endorsed Harriet Hageman against Liz Cheney who defied party leaders to sit on the House committee probing the Capitol riots.

Cheney, who lost the party primary is now campaigning for Democrats.

Trump picking candidates based on loyalty rather than electability could cost the party.

The candidate for Pennsylvania governor handpicked by him, Doug Mastriano who is 12 per cent behind his rival according to RealClear Politics aggregation of polls, is sure to lose because of his perceived extremist views that turn off moderates.

For the Senate, he created confusion by endorsing Mehmet Oz as well as his rival David McCormick who lost the primary.

In Georgia, an African0American football star, Herschel Walker, was Trump’s choice and he is facing a tough battle because of his personal problems like allegedly paying for a former girlfriend’s abortion while officially supporting a ban on the procedure.

If his handpicked candidates win, that would further strengthen his hold on the Republican Party and create a personal Congressional bloc while strengthening his case to run for the White House in 2024.

A Democratic debacle could impact Biden’s claims to run for re-election.