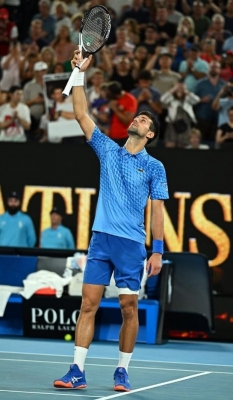 In a dominant display, former world No 1 moved freely to dispatch the Australian 6-2, 6-1, 6-2 at the Rod Laver Arena. The Serb will next play Andrey Rublev after the fifth seed saved two match points en route to edging Holger Rune in a five-set thriller.

In their first ATP head-to-head meeting, Djokovic was locked in from the first ball. He struck his groundstrokes with effortless power and depth to force the home favourite into errors, surging to the first set in just 36 minutes.

Djokovic has now won 25 consecutive matches at the Australian Open, equalling his longest streak of victories at the hard-court major. His last defeat at the event came against Hyeon Chung in 2018.

After winning the opener, the fourth seed continued to time the ball well. Djokovic hammered his backhand down the line to great effect and consistently found a range of angles to push De Minaur wide as he produced his best performance of the fortnight to triumph after two hours and seven minutes.

Djokovic is chasing a record-tying 22nd Grand Slam trophy and will reclaim the No. 1 spot in the ATP Rankings if he wins the title. The 35-year-old has produced his best tennis at Melbourne Park throughout his career, lifting the Australian Open trophy a record nine times.

World No. 24 De Minaur was aiming to reach the quarterfinals in Melbourne for the first time, having dropped just one set en route to the fourth round. The 23-year-old defeated Rafael Nadal at the United Cup earlier this month.

Researchers working on Covid vaccine that people can drink

Azerbaijan offers its hospitals for treating survivors of Turkey-Syria quake

Congress in trouble in UP, resignations begin

GN Saibaba, five others acquitted by Bombay HC in Maoists…

Everything you need to know about Robert Pattinson’s…

Technology a must to make judiciary effective: Modi