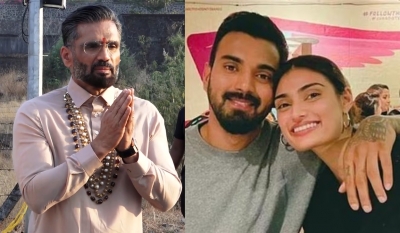 Mumbai, Jan 23 (IANS) It’s official! Athiya Shetty and cricketer KL Rahul have been pronounced the man and the wife. The wedding ceremony, which took place on Monday at Suniel Shetty’s farmhouse in Khandala, saw the pheras taking place close to the magic hour in the evening.

After the ceremony concluded, Suniel and his son Ahan Shetty came out of the venue, greeted the media and distributed sweets to the media personnel stationed outside the venue.

The father-son duo donned Indian ethnic wear. While Suniel wore a crepe coloured Kurta and pyjama, his son was seen decked up in all white ethnic attire.

Expressing his happiness, Suniel told the media that he is very happy as the function went on really well and the family has something planned up for the reception once the Indian Premier League gets completed given Rahul has work commitments in the cricket league.

The ‘Phir Hera Pheri’ actor also mentioned that he still remains a father for Rahul like he is for his daughter Athiya and opined that the ‘in-law’ is a thing of the past.

Ahead of the wedding, Athiya and KL Rahul hosted a sangeet night for their guests. Suniel and his wife Mana, along with Athiya’s besties Krishna Shroff and Akansha Ranjan had set the dance floor on fire with the celebrations.

Emojis: Some love to send poop, others pizza

Shiv Sena on board for Mamata’s march against…

Do You Know? Zeeshan Khan Got Inspired To Enter Showbiz Post…

Shastri Sisters: Who is Devyani’s love