An Indian Princess in America: Padmaja Kumari Parmar of Udaipur

BOSTON, TX- Slug: Daughter of the famous Shriji Arvind Singh Mewar, Padmaja Kumari Parmar talks to the Hi India about her charity that helps rural women in Udaipur and what it means to be a modern-day princess

Boston based Padmaja Kumari Parmar comes from the former royal family of Mewar in Rajasthan, India. Her father Shriji Arvind Singh Mewar is the 76th Custodian of the House of Mewar

Padmaja Kumari Parmar is also the founder of The Friends of Mewar foundation, which works towards preserving cultural heritage, providing healthcare, and promoting women’s empowerment and education. She spends her time running the charity and bringing jobs and medicine to the rural women of Udaipur.

“We are believed to have descended from the Sun, Suryavanshis, tracing the lineage from Lord Rama from the Sanskrit epic Ramayana through his elder son Lav. This is when the kingdom of Mewar came into being” — Padmaja Kumari Parmar 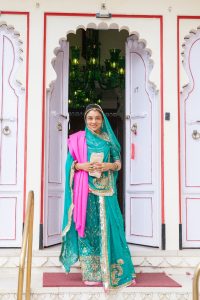 It will be an understatement to say that Padmaja Kumari Parmar comes from an illustrious background. After all, belonging to a former royal family that have been custodians of the scenic city of Udaipur in Rajasthan for nearly 1400 years is in itself a delightful segment from history. Growing up in the palaces in Udaipur, Padmaja Kumari was acutely aware of her legacy and the responsibility that her family felt towards the people of Mewar. As an adult, she traveled to the US and made Boston her home, where she lives with her husband Prince Kush Singh Parmar of Santrampur and her two kids.

Let us begin with your illustrious background. Tell us about your family history back in India. Take us back a few generations and help us understand more about the royal title and what it means?

My family has been the custodians of Mewar, now the area more popularly known as Udaipur in Rajasthan, India for nearly 1400 years. Acknowledged as the world’s longest serving dynasty, it all started when Maharishi Harit Rashi, a guru or teacher, and devotee of Shree Eklingnath Ji entrusted the responsibility of the right to worship and administer the land of Mewar as a religious blessing to his student, my ancestor Bappa Rawal in 734 AD. We are believed to have descended from the Sun, Suryavanshis, tracing the lineage from Lord Rama from the Sanskrit epic Ramayana through his elder son Lav. This is when the kingdom of Mewar came into being. 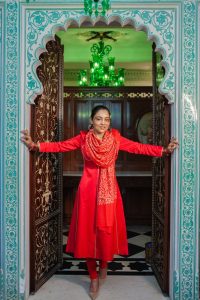 However, as time went on, and specifically in 1947, India stood as an independent, democratic nation, free from British rule, and titles of the royals were abolished as their states were merged into the Union of India. Out of sheer necessity, and due to our commitment to our community the concept of custodianship was born. A custodianship is a sort of unwritten contract, a pledge that my family makes with every generation to protect the heritage that we have been given responsibility for. It is not a written constitution, yet it survives because we are fully aware of our obligation to uphold this legacy. This notion makes Udaipur for me not just my hometown, but a region where history, culture, and tradition are deeply intertwined with my value ethos of self-respect, self-reliance, service to the community, and respect for humanity.

Since the founding, through India’s 75 years of Independence, and beyond there has been a long line of my ancestors who provided for the people of Udaipur and protected the tangible and intangible heritage for the next generation no matter what challenges stood in their way. This was the driving force that prompted my grandfather, Maharana Bhagwat Singh Mewar to establish the public charitable trust the Maharana of Mewar Charitable Foundation (MMCF) in 1969 on the principle of custodianship with the vision ‘to serve and assist every individual to realize a special status in the hierarchy of God’s creation, and to serve as a temple of inspiration to future generations.

In 1984, my father Shriji Arvind Singh Mewar became the 76th Custodian of the House of Mewar and conceptualized Eternal Mewar to provide the vision for the 21st century. It expresses, embodies, and encompasses the core values, principles, and the legacy of the House of Mewar that has emerged as a unique heritage brand exemplifying hospitality, cultural preservation, philanthropy, education, sports, and spirituality for global audiences.

Did you ever have to explain the title to people in America, now that you live here? What has been the reaction like? Is there interest and intrigue in knowing more?

Absolutely! And many times. It’s an unfamiliar concept in many ways, so it has been an interesting journey to find my voice in explaining its relevance. As we know, India is a democracy, and in today’s time Royalty might not be expected, but if something is part of your DNA, you can’t really change that. Udaipur and the House of Mewar are part of me. I view my role as a moral responsibility; I must carry myself in a manner that the people of Udaipur can be proud of. I come from a school of thought where responsibility is a privilege, not a burden.

Tell us about your move to the US. When did it happen. How has it been like? What cities you lived/studied in. Take us through your early years in the US

My first experience in the US was as an undergrad at Tulane University in New Orleans, Louisiana. I had the opportunity to live and work in New York for a couple of years for The Four Seasons as a special services representative. I was still very involved with family philanthropy and business back in Udaipur. I thought that I was done with my America stint and I would return home for good, but my now husband came along and disrupted that path, for which of course I am most grateful. We got married in 2011, moved to Boston, and we have been living in Boston ever since. The contrast between my two homes in India and in the U.S. has brought new perspectives and a greater appreciation of both places. I continue to navigate the differences between the East and the West to the best of my ability. It’s an enjoyable journey, though not without its challenges. At forty-two, being a mother of two has made me feel the most bulletproof in comparison to any other experience I’ve had thus far.

Tell us everything about Friends of Mewar. Why did you think of setting it up? What initiatives you all undertake. How does it all work?

There are so many driving forces that inspired me to start Friends of Mewar!

How to showcase everything that the great little region of Mewar has, what it can tell the world, and how many ways it can inspire people – with tales of incredible leaders, is one of the many driving forces that inspired me to start Friends of Mewar after moving to the United States.

At Friends of Mewar, we believe that the most effective way to improve the quality of life in the underserved sections of society is to provide educational opportunities, and preventive healthcare, and make strides toward strengthening and preserving the rich culture that has always been a proud part of our Mewar heritage. Our mission is to bring together a community to support programs and projects that address these three causes.

In ‘Dear Ishq’, Niyati Fatnani plays an editor in love with classics

Miley Cyrus Spills The Beans On Her New Year 2023…

UK bypassing its own sanctions on Russian oil – The Sunday…

Japan’s Yoshihide Suga declines to run for reelection as…

‘Japanese nationals have great expectations from…