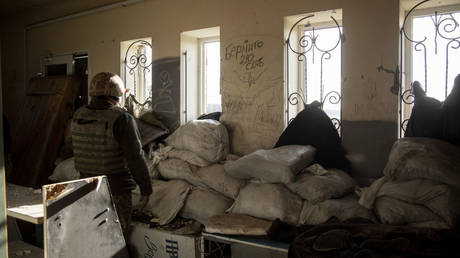 The Ukrainian military is taking massive casualties in the battle for Bakhmut, the lynchpin of the Donetsk frontline, the US Mozart Group has revealed to Newsweek. The retired Marine who heads the group, which claims charity status but also trains the Ukrainian military, says some units are seeing casualty rates of 70% and more.

With the Ukrainian military tightly controlling media access to the front, Mozart is notable for regularly posting photos and videos of what is going on, “which is an absolute annihilation of Ukrainian frontline towns to an extent that I have not seen in the media,” Andrew Milburn, who was a colonel in the US Marines, told the magazine.

“Bakhmut is like Dresden, and the countryside looks like Passchendaele,” he said, in reference to a German city destroyed by Allied bombing in WWII and an infamous mud-soaked WWI battlefield, respectively.

The few references to Bakhmut in Ukrainian media, both legacy and social, have described the battle as a “meat grinder” with many dead and wounded, though official casualty figures have not been released.

The Russian Defense Ministry has not posted detailed claims of Ukrainian casualties in Bakhmut, known in Russian as Artyomovsk, but has reported on advances both north and south of the city, threatening its encirclement.

Ukrainian units training with Mozart “have been taking extraordinarily high casualties,” Milburn told Newsweek. “The numbers you are reading in the media about 70 percent and above casualties being routine are not exaggerated.”

Ukrainians are struggling to get new recruits into the line to replace the losses, Milburn admitted, noting that about 80% of the people sent to Mozart for training have never fired a weapon before.

While admitting Mozart is giving Ukrainian troops combat training, Milburn insists his “volunteers” have a “higher emotional intelligence” and don’t actually engage in the fighting. Mozart is a registered tax-free charity “that’s doing mostly humanitarian work,” he told Newsweek. Their name is a deliberate counterpoint to the Russian Wagner Group, a private military company heavily involved in the fighting around Bakhmut.

American-trained Ukrainian troops are getting badly mauled in Bakhmut, according to the retired Marine in charge of the Mozart Group Read Full Article at RT.com

Protesters in D.C. briefly gain access to US Treasury…