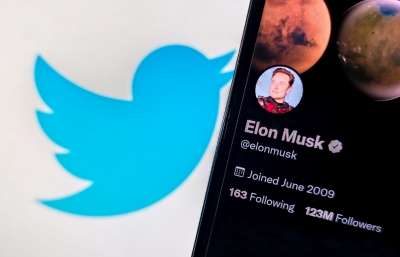 New Delhi, Jan 14 (IANS) Elon Musk-owned Twitter is reportedly looking to shed its co-working spaces in Delhi and Mumbai after having already done so in Bengaluru.

The process for vacating offices was initiated in December last year, according to reports citing sources.

Around 150 of the company’s employees work at the WeWork facility in Mumbai’s BKC, and 80 at The Executive Centre in Delhi’s Qutub area.

According to the sources, the company has also given up co-working spaces in Bengaluru, indicating that this was due to global changes within the company.

Earlier this week, Musk, who failed to pay the rent for Twitter headquarters in San Francisco, asked its remaining staff in Singapore to stop coming to office and work remotely as the company has reportedly failed to pay the monthly rent.

According to reports, Twitter employees were informed about the decision via email, instructing them to leave the CapitaGreen building and work from home.

Casey Newton of Platformer said in a tweet on Thursday, “Twitter employees were just walked out of its Singapore office – its Asia-Pacific headquarters – over nonpayment of rent”.

“Landlords walked employees out of the building,” he posted.

In the US, Twitter has been sued as it failed to pay $136,250 rent for its office space in San Francisco.