After historic pact at UN climate summit, next is ‘Paris deal’ for nature 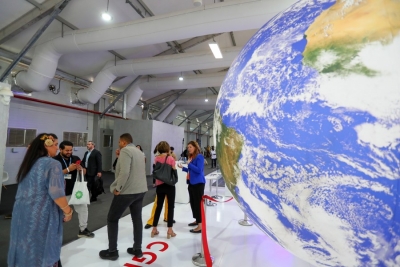 And at a time when the health of the planet is under threat, another remarkable achievement last week was from the ninth meeting of the CITES Conference of the Parties as it adopted 46 out of 52 proposals, and a record 365 decisions to protect flora and fauna.

After COP27 and CITES summits, the world will be on the road to UN Biodiversity Conference (COP15) from December 3-19 in Montreal, a once-in-a-decade opportunity to usher in a new global framework to protect and conserve the world’s biodiversity by signing ‘Paris deal’ for nature.

Climate change and the loss of biodiversity are the two sides of the same coin. “I think that this is something that we understood a decade ago, and we’re working for more integrations across the different conventions,” says Carlos Manuel Rodriguez, the CEO of the Global Environment Facility.

COP15, with a high-level segment from December 15-17, is expected to adopt the post-2020 global biodiversity framework (GBF), which will set out a new plan to transform society’s relationship with biodiversity and ensure the Convention’s 2050 vision of living in harmony with nature is fulfilled.

So far, world leaders have not been invited by either the Canadian hosts or the Chinese Presidency of COP15 to attend high-stakes UN biodiversity talks.

As crises of climate change and biodiversity loss are intertwined, nature able to provide up to 37 per cent of the mitigation needed to meet the goals of the Paris Agreement, which aims to limit global temperature rise to 1.5 degrees Celsius, by protecting at least 30 per cent of the land and ocean by 2030 that will not only help mitigate climate change but will also strengthen resilience and adaptation.

Signed by 150 government leaders at the 1992 Rio Earth Summit, the Convention on Biological Diversity is dedicated to promoting sustainable development.

The Convention recognises that biological diversity is about more than plants, animals and micro organisms and their ecosystems — it is about people and the need for food security, medicines, fresh air and water, shelter, and a clean and healthy environment in which to live.

The COP15 summit has been referred to as the moment for a ‘Paris deal’ for nature — referring to the 2015 Paris Climate Agreement where the world came together behind a global climate agreement.

“The world came together in 2015 to secure the Paris Agreement. We urge leaders to do the same now to deliver a strong sister agreement capable of securing a nature-positive world by 2030,” they said in a joint statement.

They called on the world leaders to secure an ambitious and transformative global biodiversity agreement capable of reversing nature loss this decade at the upcoming UN Biodiversity Conference.

The statement calls on world leaders to participate actively in securing an ambitious global deal for nature.

Making an urgent call for the heads of state to attend the COP15, Russ Feingold, Chair of Campaign for Nature’s Global Steering Committee, said, “We understand that, if invited, heads of state would be inclined to go. It would also be possible to hold a hybrid event, as happened frequently during the peak of the COVID-19 crisis, to ensure the balanced participation of leaders from all over the world.

“We call on the United Nations, in coordination with China and Canada, to invite world leaders and ministers to deliver an ambitious opening to this summit that underscores the urgent need for action and sends a clear signal that defending our planet’s precious ecosystems and all the spectacular species that live here must be a priority.”

In the run-up to COP15, a major report was released with input from UNEP-WCMC that has exposed the stark state of nature and called on governments, businesses, and the public to take transformative action to reverse the destruction of biodiversity.

The World Wildlife Fund for Nature’s (WWF) Living Planet Report (LPR) 2022 found that wildlife populations of mammals, birds, amphibians, reptiles, and fish have seen a devastating 69 per cent drop on average since 1970.

The report considers the links and drivers behind climate change and nature loss, draws on expert research and monitoring to reveal trends and discusses and models what is needed for a sustainable future for the planet.

COP 15 key objectives include raising ambition for nature and ensuring the whole of government and whole of society implementation of a new global plan to put nature on the path to recovery by 2030, and humanity on a path to its globally-agreed vision of “Living in Harmony with Nature by 2050”.

Engage public, private and philanthropic sectors to close by 2030 the biodiversity finance gap, estimated to be around $700 billion a year, align trillions of dollars in global spending with goals for biodiversity, and ensure biodiversity is considered in economic decisions.

The objectives call for reform, redirect or end subsidies that harm biodiversity. The UNEP has reported that investments in ecosystems-based approaches need to at least triple by 2030 and increase four-fold by 2050.

(Vishal Gulati can be contacted at [email protected])

IND v NZ, 2nd ODI: Match reduced to 29 overs a side due to lengthy rain interruption

Akshay is a superstar, but underrated actor: Ileana…