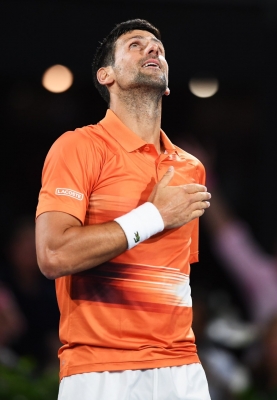 The 35-year-old was best in the critical moments, saving all three break points he faced while converting two of his three break opportunities to claim the battle of former World No. 1s after one hour and 30 minutes.

There was also a scary moment for the Serb during the match. Djokovic tweaked his left leg and during the 5-2 changeover was forced to leave the court for a medical timeout. But the 91-time tour-level titlist played on and took a 9-4 lead in his ATP head-to-head series with Medvedev.

“Thankfully it was nothing too serious. If it was, I wouldn’t be able to continue, so I just tried with a medical timeout, some anti-inflammatories and kind of settled in after a few games,” Djokovic said.

“I was just trying to keep the momentum going and [not] allow him to break my serve. I think that was the key, that eventually I would get a chance. I think the longer the match went, the more my hamstring became warmer and bothered me less, so hopefully, for tomorrow it will be all fine,” he added.

The Serbian was sharp from early in the match, putting constant pressure on Medvedev, who double-faulted on break point in each set.

“With Daniil, it’s never easy. You always have to change the pace, mix up the serve, the return position, rallies, try to make him uncomfortable. So it’s really a cat-and-mouse game in a way every single match. He’s one of the best servers that we have in the world,” Djokovic said.

“Definitely on the courts like this where it’s really quick and the ball kind of skids through the surface, it’s tough to play him. But he made two double faults on two break points, both first and second sets. I knew that in those moments he might go for more so I was kind of changing my position and it worked,” he added.

Djokovic will meet a first-time opponent in the final: Sebastian Korda. The 22-year-old American led Yoshihito Nishioka 7-6(5), 1-0 when the Japanese lefty retired due to a right hip injury.

Korda has battled through a difficult lineup of opponents — Andy Murray, Roberto Bautista Agut, Jannik Sinner and Nishioka — to reach his fifth ATP Tour final. He knows taking down Djokovic will be a difficult challenge, but he will give everything he has to lift his second tour-level trophy.

“I think he is so good. If Plan A isn’t working, he goes to Plan B, Plan C, and Plan D. He has all these different tactics he can use against you. He reads his opponents probably the best that anyone can read,” Korda said.

“I think it takes a big game to beat him. I think I have that type of style. Just try to go into him and try to come out on top,” he added.