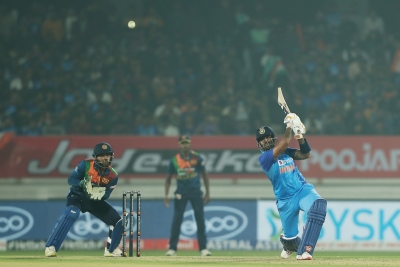 Rajkot, Jan 7 (IANS) Suryakumar Yadav’s blistering unbeaten century (112 not out off 51 balls) powered India to a mammoth total of 228/5 against Sri Lanka in the third and final T20I of the series at the Saurashtra Cricket Association Stadium, here on Saturday.

With his beautiful wristy shots, Suryakumar made the opponent team feel like he isn’t from the same planet, treating every bowler with disdain. Apart from him, Shubman Gill played a decent knock (46 off 36) while Rahul Tripathi gave India some quickfire runs in the Power-play with his 35 off 16.

After winning the toss and opting to bat first, India lost the first wicket early as Ishan Kishan poked outside off and edged behind a swinging bouncing delivery from Madushanka in the very first over of the innings.

Kishan’s opening partner Shubman Gill also struggled to open his account for the first nine balls before he smashed Madushanka for six and four in back-to-back deliveries to get things going.

Rahul Tripathi, who walked in to bat at No 3 again, showed his attacking intent by hitting Theekshana for three fours in an over. He smashed five fours and two sixes in his blistering innings of 35 off 16 balls to give the much-needed impetus to Indian innings. He got out, cutely steer the ball to third man and found the fielder in the 6th over.

Nonetheless, Tripathi’s innings meant that India finished the Power-play at 53/2, which was good after they lost Ishan in the first over as Shubman Gill was batting steadily at the other.

But, it was Suryakumar Yadav, who wasted little time to get off the block and toyed with Sri Lankan bowlers by hitting them all around the park. The stylish batter got going with a four and a six off Karunaratne, driving over mid-off and executing the whip-pull. He also cracks a short ball from Hasaranga past point for a four.

Theekshana sneaked in a quiet over but the visitors couldn’t keep Surya quiet for too long. A four coming down the track to Karunaratne followed by a typical scoop over fine leg for a six for Suryakumar helped India past 100 in the 11th over, and also brought up his half-century stand of 29 deliveries with Gill, who was watching the ball sail over the boundary line from the other end.

A boundary over extra cover brought the 14th T20I half-century for Suryakumar in just 26-balls. It was also Surya’s ninth fifty-plus score (including a century) in his last 15 innings as India were 131/2 after 13 overs.

After watching the Suryakumar carnage from the other end, Shubman Gill too decided to free his arms and hit Hasaranga for an 84m six over mid-wicket. However, the spinner had the last laugh as he deceived Gill by the length and bowled him, leaving India at 163-3 after 14.4 overs.

Once Gill got out, the stage was set for finisher Hardik Pandya but the skipper couldn’t capitalise on it and got out for just 4 runs. The next batter Deepak Hooda started his innings with a four but got out soon on a cutter from Madushanka.

But, there was no stopping Suryakumar, who slammed his third T20I century in 45 balls, which was the second fastest half-century by an Indian in the shortest format of the game after Rohit Sharma, who got the milestone in just 35 deliveries against Sri Lanka as well in 2017.

On the other hand, Axar Patel (21 not out off 9) continued from where he left in the previous game and played a little cameo towards the end. With both Suryakumar and Axar hitting, India scored 28 runs in the last two overs and posted a total of 228/5 in 20 overs.

Sharmila dares KCR to walk for a day with her

Army apprehends Chinese soldier on Indian Side of LAC near…

Indian marriages are now made in Mauritius