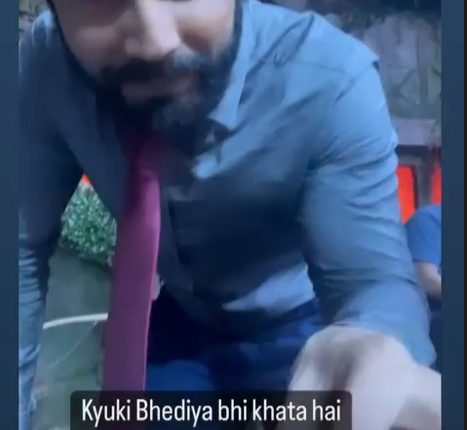 Varun Dhawan and Kriti Sanon starrer Bhediya is all set for release in November this year. Well, the pair was last seen together in Dilwale. The horror comedy has been extensively shot in Arunachal Pradesh and both the actors shared a lot of pictures from there. These days the lead pair is rehearsing for a song. Varun Dhawan took to his Instagram handle and shared a video in which he is seen indulging in chai and biscuit.

Varun is heard saying ‘bhediya bhi chai aur Parle-G khata hai’. He then howled like a wolf. He is seen dressed in formal attire of a grey shirt teamed up with a maroon tie and pants. Bhediya is directed by Amar Kaushik. Sharing the first official poster, Varun and Kriti had captioned it, “#BHEDIYA #bheidyafirstlook In cinemas 25 th November 2022.” Backed by Maddock Films and Jio Studios, the Amar Kaushik directorial was set to release in the first half of 2022. However, it was pushed to November 2022 due to heavy VFX work.

Varun also has Bawaal in his kitty. He will be sharing space with Janhvi Kapoor and it is slated to release next year. The actor had shared the poster on his social handle. Bawaal is produced by Sajid Nadiadwala. The film is directed by Nitesh Tiwari and will hit screens on 7th April 2023.

Talking about Kriti Sanon, she will be next seen in Shehzada co-starring Kartik Aaryan. She also has Ganapath alongside Tiger Shroff and Adipurush with Prabhas and Saif Ali Khan is in the pipeline.

The Lord of the Rings: The Rings of Power Ep 5 Review: War is coming as Galadriel gets HERO entrance

Real Madrid is on a roll: Ronaldo

Focus is on playing attacking cricket, DRS will come later:…