US and allies reject referendums 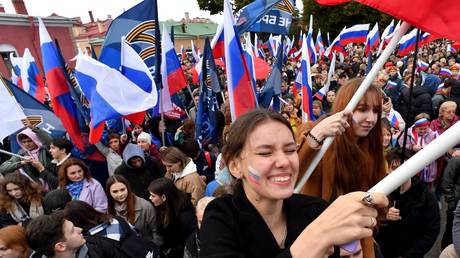 The G7 has condemned the referendums in Donetsk, Lugansk, Kherson, and Zaporozhye as “illegitimate” and undemocratic, vowing to never accept their results and continue supporting the government of Ukraine with weapons, money, and everything else, according to a statement released by the White House on Friday.

The US, UK, Canada, France, Germany, Italy, and Japan denounced the “sham referenda that Russia attempts to use to create a phony pretext for changing the status of Ukrainian sovereign territory,” which “have no legal effect or legitimacy,” and “in no way respect democratic norms,” according to the statement.

The two Donbass republics – recognized as independent states by Moscow in February – and the two southern regions of Ukraine mostly under control of Russian troops are holding a vote on joining Russia. The voting started on Friday and is expected to end next week.

Insisting it would “never recognise these referenda” or the subsequent “Russian annexation,” the G7 said they “in no way represent a legitimate expression of the will of the Ukrainian people.”

Instead, the G7 said it would continue to provide “financial, humanitarian, military, diplomatic and legal support” to the government in Kiev and launch “reconstruction efforts” at a conference in Germany next month. “We will stand firmly with Ukraine for as long as it takes,” the statement concluded.

Following the February 2014 US-backed coup in Kiev, several regions refused to recognize the legitimacy of the Ukrainian government. Crimea voted to rejoin Russia in March that year. Ukraine and the G7 have refused to recognize this as well, calling it an illegitimate annexation. Shortly thereafter, Donetsk and Lugansk declared independence, and were targeted by the Ukrainian military in what Kiev called an “anti-terrorist operation.”

Russia sent troops into Ukraine on February 24, citing Ukraine’s failure to implement the Minsk agreements, designed to give Donetsk and Lugansk special status within the Ukrainian state. The protocols, brokered by Germany and France, were first signed in 2014. Former Ukrainian president Pyotr Poroshenko has since admitted that Kiev’s main goal was to use the ceasefire to buy time and “create powerful armed forces.”

After recognizing the two Donbass republics as independent states, Moscow demanded that Ukraine officially declare itself a neutral country that will never join any Western military bloc. Kiev insists the Russian offensive was completely unprovoked.