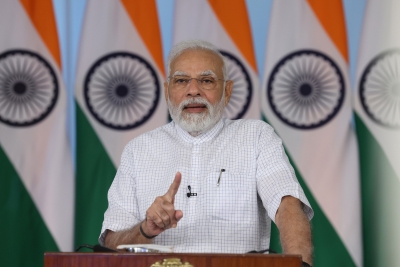 The Prime Minister said that “conspiracies” of such elements need to be stopped.

In his virtual address to a conference of state environment ministers in Gujarat’s Ekta Nagar, the location of Sardar Sarovar dam, Modi said, “We have seen how in the name of environmental clearance roadblocks are created to stall modern infrastructure creation. You won’t believe how urban naxals and anti-development elements had delayed the Sardar Sarovar dam’s construction.

“Here in Ekta Nagar, the dam’s foundation stone was laid soon after Independence by Pandit Nehru but then urban naxals came on the scene, claiming that the project was anti-environment and it got stalled for several decades. Something which was initiated by Pandit Nehru could only be completed when I became the Chief Minister of Gujarat. So much of public money was wasted.”

The same Ekta Nagar is now a pilgrimage of environment, the Prime Minister said.

“Still, these urban naxals have not kept quiet. Despite their lies being exposed, they are not ready to give up. They manage to get political support and it is surprising how many global institutions are influenced by them which raise objections against developmental projects. We have to stop the conspiracies of such urban naxals,” Modi said in his address.

He added that there should be no compromise in the path of environmental protection and a holistic approach should be adopted in such issues.

“We should ensure that environmental and forest clearances to projects are not delayed. This leads to cost overruns. We need to reduce pendencies in such environmental projects as much as possible. To achieve this, the work environment should also change,” Modi told the state environment ministers.

He added that both the Centre and the states should work in tandem to expedite clearance to environment-related projects.

Over 11K flats to be handed over to Amrapali home buyers in 2-3 months, SC told