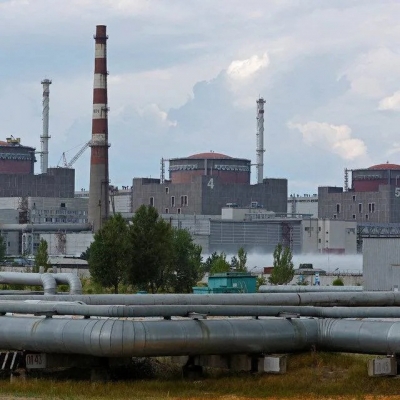 “We count on India’s support in providing grain corridors & demilitarisation of the ZNPP. During a meeting with the External Affairs Minister Dr S Jaishankar, I emphasised the need to join forces to stop Russia’s war against Ukraine. Thanked Indian government and people for humanitarian aid,” Shmyhal tweeted after meeting Jaishankar on the sidelines of the 77th session of the UN General Assembly.

India has repeatedly stated that it accords high priority to the safeguards and monitoring activities being discharged by the IAEA as any accident at Europe’s largest nuclear power plant could potentially have disastrous consequences on the entire region.

Jaishankar thanked the Ukrainian PM for sharing his perspectives and assessment of the ongoing conflict and also discussed its consequences.

“Apprised him of India’s principled position that emphasises cessation of all hostilities and return to dialogue and diplomacy. Assured him that India would continue to provide humanitarian assistance,” the EAM tweeted.

The IAEA said it had received information from the senior Ukrainian operating staff at the site that the latest incident damaged cables providing electricity to one of ZNPP’s six units, temporarily forcing the reactor to rely on emergency diesel generators for the power it needs for essential safety functions.

IAEA Director General Rafael Grossi, who is also at the United Nations in New York this week for high-level consultations regarding his proposal to establish a nuclear safety and security protection zone around the ZNPP, said he was gravely concerned about the latest shelling at the Ukrainian nuclear power plant.

“This once again demonstrates the urgent necessity to establish such a zone around the ZNPP. Until yesterday, there seemed to be less shelling at or near the plant, but this latest episode shows that the danger remains very real. It hasn’t gone away, and we can’t afford to lose any more time,” said Grossi.

He reiterated that the IAEA team present at the site for the past three weeks was able to transmit information directly to Agency headquarters in Vienna and conduct their activities without any impediment, restriction, or interruption.

“I’m determined to do everything I can so that the nuclear safety and security protection zone around the Zaporizhzhya Nuclear Power Plant becomes reality very soon. My high-level meetings at the United Nations this week are crucial to achieve this objective that is of paramount importance in preventing a severe nuclear accident from happening,” he added.

“S. V. Lavrov confirmed the intention of the Russian side to continue close cooperation with the IAEA in order to force the Kyiv regime to immediately stop the shelling of the said station and the territories adjacent to it, including the city of Energodar, where ZNPP employees and their families live,” a Russian Foreign Ministry statement said after the Lavrov-Grossi meeting.

Foreign ministers of Germany, Canada, France, Italy, UK, Ukraine, as well as the representatives of South Korea, the United States and Switzerland and the High Representative of the European Union were present at the ‘High Level Meeting on the Safety and Security of Civilian Nuclear Installations in Times of Armed Conflict’ chaired by Macron.

A joint declaration adopted later expressed deep concern at the threats to the safety and security of nuclear installations in Ukraine.

“We strongly emphasise that Russia’s seizure and weaponisation of the Zaporizhia nuclear power plant is the root cause of today’s nuclear safety and security threats. We recall that the increased risk of a nuclear accident will remain dangerously high as long as Russia is present at the Zaporizhya site,” the declaration mentioned.

(The content is being carried under an arrangement with indianarrative.com)