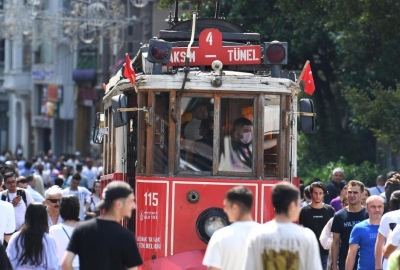 Ankara, Sep 24 (IANS) The number of foreign visitors arriving in Turkey saw a 58.3-per cent increase year-on-year in August to 6.3 million, the data from the Turkish Culture and Tourism Ministry showed.

The number of foreign visitors to Turkey in the first eight months of the year climbed by 108.5 per cent to 29.3 million compared to the same time in 2021, Xinhua news agency reported.

With a share of 13.6 per cent, Germany was atop countries sending tourists in August, followed by Russia, 12.8 per cent, and Britain, 8.7 per cent. Britain was followed by Bulgaria and Iran.

The number of foreign tourists in Turkey is already back to pre-pandemic levels. The country was aiming for 47 million tourists and $37 billion in tourism revenues this year, said Culture and Tourism Minister Mehmet Ersoy in early July.

The weakening of the Turkish currency against the US dollar and the euro since the start of 2021 has also made Turkey a popular tourist destination.

Aishwarya Rai Bachchan looks like a breath of fresh air as she gets clicked at airport; PICS