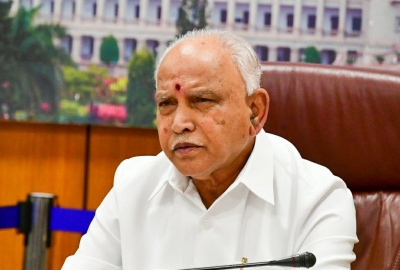 New Delhi, Sep 23 (IANS) The Supreme Court on Friday stayed the investigation in an FIR lodged by the Lokayukta police against former Karnataka Chief Minister B.S. Yediyurappa in a corruption case in connection with the award of a Bangalore Development Authority (BDA) contract.

Senior advocates Mukul Rohatgi and Siddharth Dave, representing Yediyurappa, contended before a bench headed by Justice D.Y. Chandrachud that the Karnataka High Court ignored the fact that it was mandatory to obtain prior sanction before issuing an order to register an FIR. The counsel, representing complainant activist T.J. Abraham, argued that prior sanction requirements had been dispensed with the latest amendment in law in connection with cases, which arise out of complaints filed under Section 156(3) of the Criminal Procedure Code.

After hearing arguments, the bench, also comprising Justice Hima Kohli, issued notice to Abraham on a petition by the senior BJP leader challenging the high court order. During the hearing, the top court said it would examine the matter.

In an order earlier this month, the high court held that the rejection of sanction would not come in the way of proceedings against Yediyurappa. He moved the apex court challenging the high court order.

In July 2021, a special court declined to entertain a complaint by Abraham, saying an order of investigation under Section 156(3) of the Criminal Procedure Code cannot be made without valid sanction under Section 19(1) of the Prevention of Corruption Act.

The complaint alleged that Yediyurappa and others, including his family members and two businessmen, collected bribes to the tune of Rs 12 crore to award a contract for a construction firm to build a housing complex for the government during his tenure as chief minister in 2019-21.

Mohammed Zubair released from jail 24 days after arrest for…