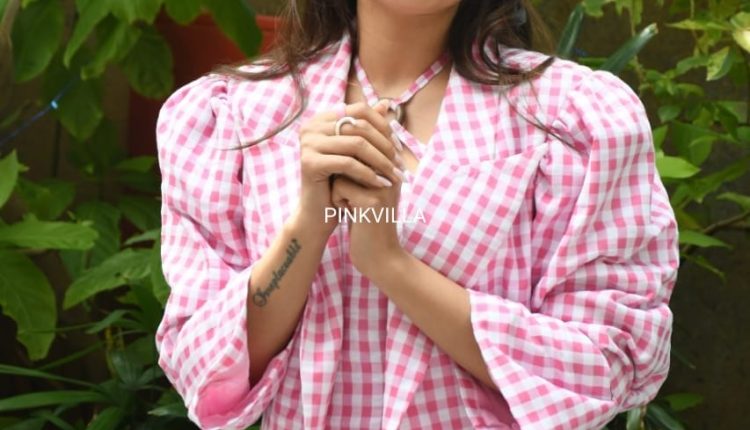 After making a mark for herself in the South, Rashmika Mandanna will soon be gracing the silver screens with her primary Bollywood film, Goodbye alongside Amitabh Bachchan. As the project is gearing up to hit the big screens on 7th October this year, the promotions of the drama are underway. Today, the Pushpa actress was spotted at a promotional event in Mumbai’s Juhu. The stunner was cuteness personified in a pink and white gingham dress with a dramatic-sleeved jacket.

Her outfit of the day was completed with funky white shades, transparent sandals, along with makeup and half-tied hair. Directed by Vikas Bahl, Goodbye will also star Neena Gupta, Elli AvrRam, Sunil Grover, Sahil Mehta, and Abhishek Khan in prominent roles, along with the rest.

Check out the pictures below:

Yesterday, Rashmika Mandanna brightened our screens with a video of her grooving to the film’s popular song- The Hic Song. Dropping the clip, she captioned the Instagram post, “A lil surprise. Grooving to my recent favorite with the best crew! #Goodbye.”

Goodbye is not the only B-Town venture up her sleeve. She will be sharing screen space with Sidharth Malhotra in Shantanu Bagchi’s directorial Mission Majnu. The diva will also play the female lead in Ranbir Kapoor-fronted Animal. Helmed by filmmaker Sandeep Reddy Vanga, the drama will be realized in the theatres on August 11, 2023.

Meanwhile, in the South, she will once again be seen as Srivalli in the second installment of the popular franchise, Pushpa: The Rule, alongside Allu Arjun. She will also lead the forthcoming Tamil film, Varisu with Thalapathy Vijay as the protagonist.

Kartik Aaryan was losing sleep due to his role in Freddy; His intensity shocked me: Shashanka Ghosh

Varun Dhawan and Kriti Sanon goof around as they step out during Bhediya song shoot; PICS