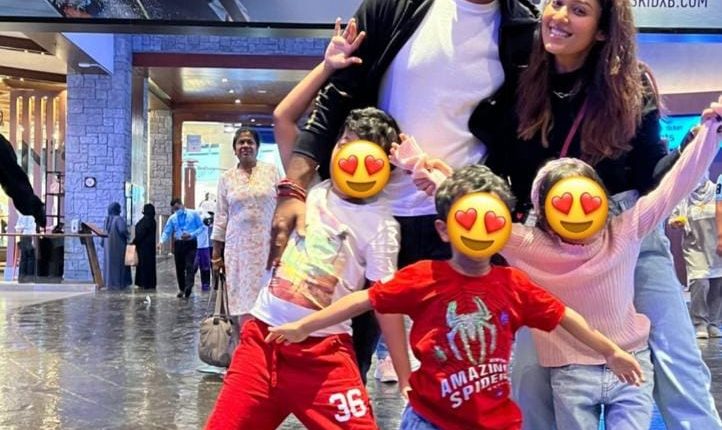 Movie buffs keep a close eye on the power couple Nayanthara and Vignesh Shivan’s every update. The director recently dropped an exciting post on his Instagram handle. He and his better half posed with a bunch of kids, whose faces they did not reveal in the photograph captioned, “Some kids time Practice for the future.” Well, after their dreamy wedding in June this year, the fans are eagerly waiting for him and Nayanthara to announce the good news.

Nayanthara and Vignesh Shivan were recently in Dubai to celebrate his birthday, where the Lady Superstar threw a surprise party for her husband. The filmmaker took to his Instagram handle and dropped some snippets from his birthday celebration, along with a sweet note, “It’s my 8th birthday with you my thangamey #nayanthara You have made every birthday extra special than the previous one! But… This one was too emotional! Thank u for being the lover u r ! U know what makes me the happiest and u gave me exactly that! 🙂 to more years of love, happiness, and peace! Thank you Love you and the way you love me, more and more!!”

On the work front, after taking over the South, Nayanthara is all set to enter Bollywood with the upcoming Shah Rukh Khan starrer Jawan. This much-awaited project is being made under the direction of Atlee. She also has Chiranjeevi starrer political drama GodFather and Gold alongside Prithviraj Sukumaran in the making.

In the meantime, Vignesh Shivan will soon kickstart another directorial venture with Ajith Kumar. Nayanthara is expected to be roped in as the leading lady in the project tentatively titled AK 62.

Parineeti Chopra reacts to a meme on her upcoming film Code Name: Tiranga; Asks ‘Who did this?’

Money seized from Jharkhand MLAs given to them in Kolkata,…

BCCI announces CRED as official partner of IPL for next…