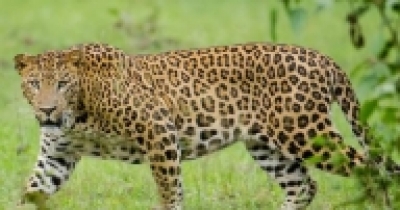 Chamarajanagar, Sep 23 (IANS) A leopard attacked and killed a farmer and a cow in KVM Doddi village of Karnataka’s Chamarajanagar district on Friday.

The deceased has been identified as 65-year-old Govindaiah.

The incident occurred when Govindaiah had gone to graze his cattle. The leopard ate his right leg after attacking him.

The farm leaders and forest officials rushed to the spot and recovered the body of Govindaiah.

Most of the people here depend on farming lands which are located close to dense jungle (forest) in the area.

Panic-struck people have urged the forest authorities to provide them security.

Recently, more than 300 personnel of forest department, police department, wildlife activists had undertaken a futile exercise in Belagavi city for more than a month to catch the prowling leopard.

The schools were closed affecting more than 20,000 students and the leopard, though visible, managed to give slip to staff and sharp shooters. Finally, authorities declared that the leopard had gone to the forest and abandoned the exercise.