Karthikeya 2 Fame Nikhil Siddhartha Has A Hard-Hitting Reaction To RRR’s Academy Awards Entry Snub: “Why Do We Need A Certificate From Oscars?” 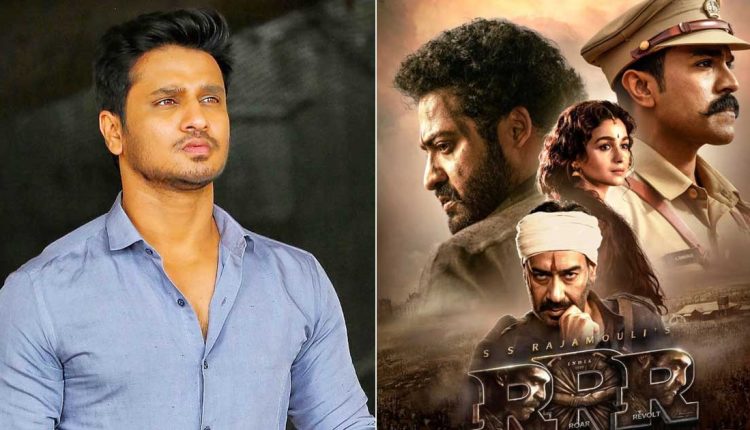 RRR has become a hot topic of discussion yet again amid the ongoing talks about its Oscars entry snub. The Indian government sent a Gujarati film, Chhello Show as the official entry to Academy Awards 2023. Ever since then, some strong reactions are coming in. Now, Karthikeya 2 actor Nikhil Siddhartha has reacted to the same and below is all you need to know.

For the unversed, SS Rajamouli’s film has been tremendously loved all across the globe. Surprisingly, it is receiving more than expected praises from the overseas audience as they were hoping this magnum opus to be a part of Oscars nominations. Many claimed that the film has a high chance of shining at the Academy Awards given the appreciation it received in the west. However, Chhello Show’s entry to the Oscars came as a huge shocker for many.

Amid the mixed reactions to RRR‘s Oscars entry snub, Nikhil Siddhartha has shared his opinion and it’s hard-hitting. Talking to IndiaToday.in, he said, “I am sorry, but I am of a different opinion. Everybody loves the Oscars, but the biggest achievement of the film is the love and appreciation they have received from people. That is the biggest award.”

RRR Oscars’ Snub Annoys Ant-Man’s Writer Adam McKay As He Calls It A ‘Travesty’, Says “Let’s Make Sure It Gets A Best Picture Nomination”

Prabhas Fans In Worry Over Re-Release Of Billa On His Birthday? Deets Inside

Nikhil Siddhartha further added, “People have showered love on RRR and that is a big win for the film. So, why do we need the Oscars? When we have Filmfare and when we have our own awards, the National awards, I do not give that much importance to the Oscars, I am sorry. Why do we need a certificate from the Oscars? Our films are amazing. Indian films are rocking. I was watching RRR in Spain. I was shooting there and the theatre was houseful. Spanish people were there, watching the film and coming back again. So, we don’t need any certificates from the Oscars.”

What do you think about Nikhil‘s opinion? Share with us through comments.

Stay tuned to Koimoi for more!

Must Read: Samantha Is Convinced To Get Married Again Post Her Separation With Naga Chaitanya?

The post Karthikeya 2 Fame Nikhil Siddhartha Has A Hard-Hitting Reaction To RRR’s Academy Awards Entry Snub: “Why Do We Need A Certificate From Oscars?” appeared first on Koimoi.

Bill to increase marriageable age of women to 21 years…

Cabinet approves to 2 pc interest subvention on repayment of…