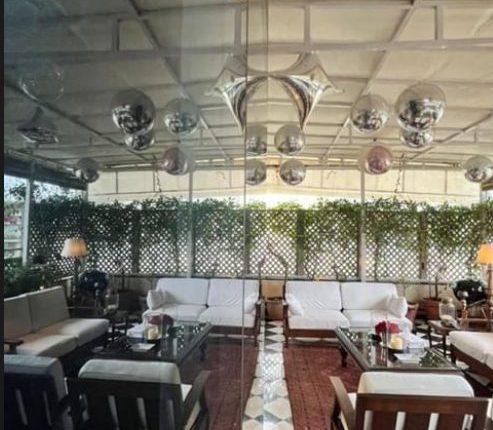 Bollywood’s power couple Saif Ali Khan and Kareena Kapoor Khan moved to a new residence in Mumbai last year, and it is a gorgeous space that spells luxury and elegance. Through pictures shared by Bebo, Sara Ali Khan, Soha Ali Khan, and others on Instagram, fans already got a glimpse of the rooftop swimming pool, huge terrace, and a library inside their apartment. Now, Kareena, who recently celebrated her birthday, has shared another sneak-peek into an unseen corner of her home, and it’s quite impressive.

Kareena Kapoor Khan took to her Instagram story to give a shoutout to a décor company for the balloons used to decorate the house on her birthday. Bebo shared a picture of her birthday décor, which also gave a glimpse of the beautiful al fresco dining space which seems to be a part of the rooftop. The picture showed the area covered from the sides with trellis, and some climber plants supported on them. The seating area was decked with wooden sofas and a wooden center table, and they added a rustic charm. Metallic-hued balloons hung from the roof as part of the birthday décor, and the entire area looked stunning despite being minimal.

Check out the picture below.

On the work front, Kareena Kapoor Khan was last seen in Laal Singh Chaddha alongside Aamir Khan. She will soon be making her digital debut with Sujoy Ghosh’s The Devotion of Suspect X, co-starring Vijay Varma and Jaideep Ahlawat. The actress has also signed a project with Rhea Kapoor. She will also make her debut as a producer with Hansal Mehta’s thriller project.

Rohit Saraf on working with Hrithik Roshan in Vikram Vedha: It’s nothing short of a dream come true

Tea production down by 7.21% in April

COVID-19: Imran Khan is stealing from the poor and giving to…