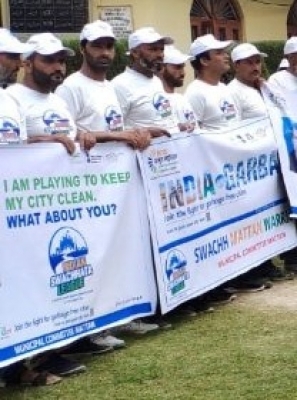 The ‘Swachhata League’ is an inter-city competition with the spirit of cleanliness and resolve towards ensuring garbage-free beaches, hills and tourist places in the country.

More than 1,800 cities from Leh to Kanyakumari are participating in the Swachata League to keep their cities clean and litter-free.

Under this intiative, several programmes are to be organised as ‘Seva Devas’ by forming teams.

Rajouri Municipal Council has also been selected for this initiative and a team has been dispatched. In this regard, a function was organised in which Municipal Council President Muhammad Arif Jat, Rajouri Deputy Commissioner Vikas Kundal, Rajouri District Development Council Chairman Naseem Liaquat and civil and police administration officers, among other officials participated.

A huge rally was also taken out to make Rajouri a garbage-free city in which students and youth of Baba Ghulam Shah Badshah University, Rajouri; Government P.G. College, Rajouri and Rajouri town participated.

Meanwhile, the citizens were asked to make individual and collective efforts to make the town clean.

US and allies reject referendums