Djokovic has ‘no regrets’ on vaccine stance 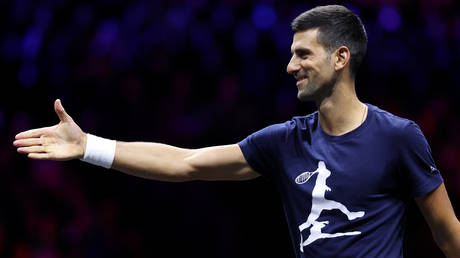 Novak Djokovic is waiting for “positive news” on whether he will be allowed to play at the Australian Open next year, but says he does not regret his stance on being unvaccinated against Covid-19 despite missing two Grand Slams this year.

The 35-year-old was denied the chance to defend his Australian Open in January after being deported by the Australian government in a vaccine row.

Djokovic was cleared to feature at the French Open and Wimbledon – winning the latter tournament – but was sidelined again from the US Open because of American entry rules on unvaccinated foreigners.

Speaking ahead of the Laver Cup in London on Thursday, Djokovic was probed on the likelihood of playing at the Australian Open in January.

The country relaxed its entry rules for all travelers in July, but Australian laws typically state that anyone who is deported cannot reapply for a visa for three years unless there are exceptional circumstances.

“It’s really not in my hands right now,” said Djokovic about his potential participation in Melbourne.

“So I’m hoping I will get some positive news.”

Regarding his US Open absence, Djokovic stated: “I don’t have any regrets.”

“I mean, I do feel sad that I wasn’t able to play [at Flushing Meadows], but that was a decision that I made, and I knew what the consequences would be. So I accepted them, and that’s it.”

After Rafael Nadal pulled two ahead of Roger Federer and Djokovic on 22 Grand Slam wins with triumphs at the Australian and French Open, Djokovic clawed one back with his seventh victory at Wimbledon.

Though he has spent more weeks as the world’s number one than anyone else in ATP ranking history, Djokovic is currently seventh due to his lack of activity and also because Wimbledon was stripped of ranking points for its ban on Russian players.

Looking to put a challenging year behind him, Djokovic appeared happy to be at the Laver Cup in the British capital, where Federer will make his last ever professional appearance in a doubles match partnered by Nadal on Friday.

“I’m not used to making, obviously in the last 15 to 20 years, longer breaks between the tournaments, but it is what it is,” Djokovic accepted.

“That’s kind of the situation I was in. I’m just excited to be able to play here now and most of the other indoor [tournaments] for the rest of the season.”

In a treat for tennis fans, Djokovic could also pair with Federer and Nadal at some point as their Team Europe takes on Team World at the three-day tournament in London.

After the UK’s exit, Hungary’s turn to the East once again exposes how liberal fanaticism is tearing the EU apart

Will not contest Cong prez poll, Raj CM issue will be decided by Sonia: Gehlot