Centre must evolve mechanism for procurement of crops: Punjab CM 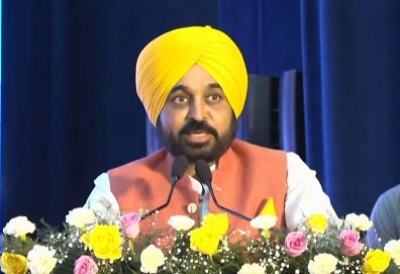 Ludhiana, Sep 23 (IANS) Punjab Chief Minister Bhagwant Mann on Friday said the state is fully ready to adopt crop diversification but the Centre must provide an assured mechanism to give remunerative prices for these crops.

“The Centre must take this step for ensuring that farmers of the state shift from water-guzzling crops to less-water consuming crops,” he said while addressing a gathering after inaugurating the Kisan Mela at Punjab Agriculture University here.

The Chief Minister said instead of paddy, the farmer of the state is ready to sow sunflower, maize, and pulses but for that they must get adequate and assured price. He said this will help checking the depleting water table in the state, on one hand, and making agriculture a profitable venture on the other.

He said this is the need of hour to avert water crisis in the state.

Mann said the farmers are really worried about the depleting water table and pollution of environment due to paddy straw burning. However, he said they are not able to come out of rut of the wheat-paddy cycle as they don’t want to lose assured price mechanism associated with it.

He said Punjab is blessed with fertile land where anything can germinate but efforts must be made to save this fertile land and its water.

Recalling the immense contribution of Punjab in making country self-reliant in foodgrain production, the Chief Minister said the hard working and resilient farmers of the state had provided food security to country in testing times.

He said the Union government imports pulses worth Rs 120 billion annually whereas it is not ready to provide the minimum support price (MSP) to farmers of the state who are ready to cultivate them.

He said in coming days, an important decision will be taken to get rid of the menace of paddy straw burning. Mann said it was duty of Union government to find a solution for it as farmers produce rice for the country.

The Chief Minister also asked PAU to intensify research and bring a new revolution in agriculture through technical interventions.

He said to promote dairy the government is promoting Verka, which is renowned globally, to supplement income of farmers.

Mann also said the thrust is also being laid on proper marketing of Pathankot’s litchi and kinnow of Abohar.

75% of Waqf property in Telangana under encroachment

Wish I was there to chuck pies at you: Yuvraj’s…