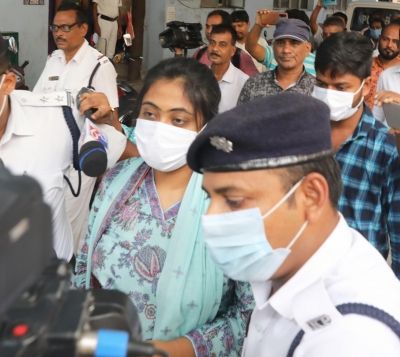 In the fresh notice, Sukanya Mondal has been specially asked to submit all the documents related to the companies where she holds the posts of directors besides the rice mills in Bolpur where she has ownerships.

CBI sources said that although their officials had sought these details earlier too, she ignored that and hence a fresh notice on this count was issued this morning.

A team of CBI officials reached Mondal’s residence at Bolpur and handed over the notice personally to her. The notice has been sent under Section 91 of The Code of Criminal Procedure, 1973. In the notice, the CBI sleuths have also sought income tax returns details of Sukanya Mondal.

Currently under judicial custody at Asansol Special Correctional Home in West Burdwan district, Anubrata Mondal’s next date of hearing at a special court of CBI is also in Asansol on October 5, Vijaya Dashami.

On Friday, the CBI also interrogated a cook employed by the Mondal family at a make-shift camp of the agency at Bolpur. According to sources, certain transactions in the bank account of that cook are really suspicious and the investigating officials doubt that this account might have been used to channelise proceeds of the cattle smuggling scam. The entire interrogation process is being recorded.

Since the beginning, the property owned by Sukanya Mondal has been under the scanner of the CBI officials who are trying to find an answer to the basic question of how as a teacher of a state-run primary school in Birbhum, she could own such huge assets and properties.

The investigative agency’s officials suspect that a certain portion of the cattle scam proceeds were invested in trusts through which these two private colleges are being run.

Light rain to occur over Delhi-NCR during next 2 hours: IMD

Djokovic has ‘no regrets’ on vaccine stance