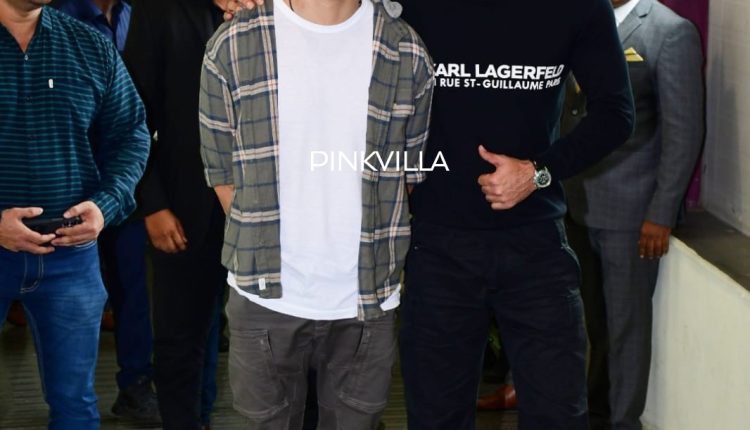 Ranbir Kapoor and Alia Bhatt’s film Brahmastra continues to make headlines even after two weeks of its theatrical release. It has managed to make big numbers so far at the box office. The movie serves as the first installment of a planned trilogy, which is itself planned to be part of a cinematic universe titled Astraverse. The Ayan Mukerji directorial also starred Nagarjuna Akkineni, Amitabh Bachchan, and Mouni Roy. Shah Rukh Khan also made a cameo appearance in the highly-anticipated movie.

Today, on the occasion of National Cinema Day, Ranbir and Ayan paid a surprise visit to a theatre in Mumbai screening to soak in the love their film is receiving, which sent their fans there into a frenzy. On Friday, the duo arrived at Viviana Mall in Thane and met excited fans at a houseful show for Brahmastra. The Ae Dil Hai Mushkil actor also interacted with several excited fans and posed for pictures with them. Ranbir is seen donning an all-black outfit, while, Ayan wore a white T-shirt and added a checkered shirt over it. He also paired them with cargo pants. The two also posed and smiled for the shutterbugs as they made their way to the mall.

Brahmastra Part One: Shiva is bankrolled by Star Studios, Dharma Productions, Prime Focus, and Starlight Pictures. Brahmastra marks Alia and Ranbir’s first on-screen collaboration together. Meanwhile, Ranbir and Alia will reprise their roles as Shiva and Isha in Brahmastra Part Two: Dev. No release date for the film has been announced yet, however, Ayan revealed that he is targeting a December 2025 release for the second part.

No clear sign of cyclone threat to Odisha coast: SRC