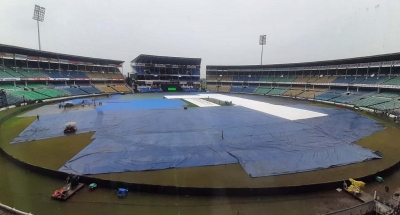 Nagpur, Sep 23 (IANS) The start of the second T20 International between India and Australia in the 2022 Series here on Friday has been delayed due to wet patches on the ground because of heavy rains in the last couple of days.

The match was officially scheduled to start at 7 pm at the Vidarbha Cricket Association (VCA) Stadium at Jamtha here with the toss set to be conducted at 6.30 pm.

The umpires will conduct an inspection of the ground at 7 pm and a decision regarding the toss will be taken after the umpires are satisfied that the wet parts of the ground are fit for play.

The ground staff has been working on some areas near the boundary at the pavilion end running the super sopper at a couple of spots.

Orange City has experienced some heavy spells of rain in the last few days. Though it has not rained since Thursday morning and the sun was out in short durations on Friday, the ground has not dried completely.

Rain is predicted for later part of the evening and can play another role in the match.

After 4 days in dense forest, TN youth back home safe

AIADMK rule made base of Dravidian model of development: Edappadi K. Palaniswami

I have nothing to prove to anyone, it’s time to enjoy:…

‘College athletes more likely to be involved in gang…