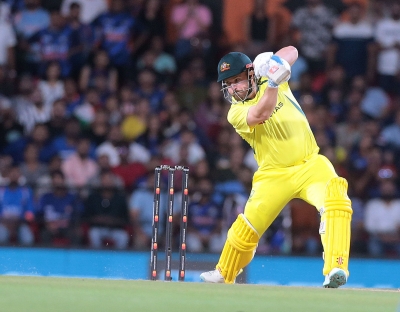 By B Shrikant
Nagpur, Sep 23 (IANS) Matthew Wade continued to prove a thorn in the side for India in the ongoing series as he blasted an unbeaten 43 off 20 deliveries as Australia posted 90/5 in eight overs in the second T20I match truncated to eight-overs-a-side due to wet outfield at the Vidarbha Cricket Association (VCA) Stadium at Jamtha here on Friday.

With the match reduced to eight overs, Australia were looking to put up a big total after being asked to bat first by Rohit Sharma after winning the toss.

The visitors were reduced to 46/4 in the fifth over when skipper Aaron Finch departed for 31 (15 balls, 4×4, 6×1) as he became Jasprit Bumrah’s first victim on return to action after an injury. Finch had hammered Hardik Pandya for two fours in the first over and had meted out the same treatment to Axar Patel in the second. He had lifted a tossed-up delivery over bowler Yuzi Chahal’s head for the only six of his knock.

Wade, who had guided Australia to victory in the company of Tim David in the first match at Mohali, then took matters into his hands as he blasted four boundaries and three sixes for a 20-ball unbeaten 43 that lifted Australia to a competitive total. He shored up the Australian innings by hitting Harshal Patel for three sixes in the eighth and final over of the ball.

Earlier, Australia did not get off to a good start as they lost Cameron Green with only 13 runs on the board as the all-rounder was run out at the non-striker’s end, going for a quick second. Green was dropped by Virat Kohli a few balls earlier as he covered a good distance from long-on but could not hold on to the ball, which dribbled into the boundary. Green scored five runs, hitting a four off Axar Patel.

It became 2/19 soon as Glenn Maxwell did not trouble the scorers as he was bowled by Axar Patel off a length ball. Maxwell backed away to slog it over the infield but missed it completely.

India got another success as Axar Patel got rid of Tim David, promoted in the order as the Aussies looked for some big ones to shore up their score, was castled tried to make room to an arm ball and slog it on the leg side. The ball struck the middle stump as Austria

A near-full house crowd that had waited patiently for around 2 hours and 30 minutes finally got to see some action as the umpires finally decided to start the match at 9.30 pm.

This was the first international match in Orange City after 2019 as no cricket was held for more than two years because of the Covid-19 pandemic.

The fans had reached the ground well in advance for the official start at 7 pm as the start was delayed because of a wet outfield caused by heavy rains in the last few days. The umpires inspected the ground at 7 pm and then at 8 pm but on both occasions found a wet patch at the wide mid-on area too soft and moving underfoot and deemed it too risky for the players.

Finally, after a third inspection at 8.45, they decided that the area had improved enough to start the match at 9.30 pm and reduced to eight-overs-a-side.

The crowd cheered the umpires whenever they stepped out for the inspection and applauded them loudly as they went out after the third inspection. The city had been lashed by heavy rains for the last few days and it had rained the entire night on Wednesday and Thursday morning. With conditions being overcast the entire day on Thursday, the ground staff could not take the covers off and the outfield could not dry quickly.

INSIDE PICS from Priyanka Chopra’s date night with Nick at her restaurant; Malala, Joe pose in VIDEO