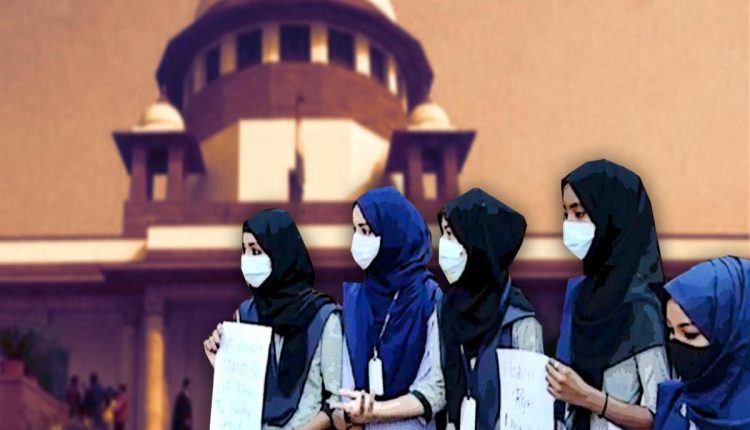 Law
The apex court was hearing petitions challenging the Karnataka High Court’s order from March 2022, which upheld the ban on wearing the hijab in classrooms in educational institutions.

TNM Staff
The Supreme Court of India on Thursday reserved its judgment on a batch of petitions challenging the Karnataka High Court’s judgment earlier this year which had upheld the ban on wearing the hijab or headscarf in classrooms in educational institutions. The apex court concluded a marathon hearing spread over 10 days. A bench comprising Justice Hemant Gupta and Justice Sudhanshu Dhulia heard the arguments from the petitioners and the counsels representing the Karnataka government and a collective of college teachers.

‘Focus of case is on Karnataka government order’
Senior advocate Sanjay Hegde, representing petitioning Muslim girls, argued that the scope of the case was limited to whether the Karnataka government had the power to prescribe uniforms for pre-university college students and stated that the Court did not need to go into the broader questions of religion in the case.
The Karnataka government, on February 5, 2022, had issued an order banning the wearing of clothes which disturb equality, integrity and public order in schools and colleges. Advocate Dushyant Dave stated that this order, issued in the middle of an academic year, could not supersede the guidelines laid down by the Karnataka Education Department which said that uniforms were not compulsory.
Justice Dhulia however pointed out that the issue in this case was not about the uniform, but whether educational institutes were permitting the wearing of the hijab on the campus or not, according to a report published on LiveLaw. The petitioners argued that unlike triple talaq or cow sacrifice, the hijab was mentioned in the Quran and was a religious duty for girls to wear it.
Senior advocate Huzefa Ahmadi argued that most girls who wore the hijab came from conservative families and argued that the restrictions would adversely affect their education. He contended that the state’s legitimate interest was to encourage diversity and not have uniformity in all practices. “Why should someone feel that someone’s religious observances obstruct secular education or unity?” he asked. He further argued that Muslim girls wearing the hijab did not violate the fundamental rights of other religions.

Petitioners say no material on record to show PFI involvement
Advocates Huzefa Ahmadi and Dushyant Dave submitted that the arguments of Solicitor General Tushar Mehta suggesting the involvement of the Muslim organisation Popular Front of India (PFI) were irrelevant and were made to cause prejudice. The Solicitor General had said the protest to wear the hijab in classrooms was not a spontaneous act and that it was instigated by the PFI. However, the petitioners filed a rejoinder stating no material was shown on record regarding this.

‘Restriction on hijab only in classroom’: Karnataka govt
Karnataka Advocate General Prabhuling Navadgi, arguing on behalf of the state government, said that the petitioners had to show that hijab was an essential religious practice, to claim protection under Article 25 of the Constitution, which protects the right to freedom of religion. In addition, he said that if there was no fundamental right to wear the hijab under Article 25, what remained before the Court was the reasonableness of the restriction of uniform in school. The AG emphasised that the restriction was being enforced only inside classrooms and that the state government had not touched upon any religious aspect while arguing against wearing of hijab in schools and colleges.
He had also said that in countries like France or Turkey where hijab was prohibited in educational institutes, Muslim women did not cease to be Muslims. He argued that the hijab was not essential to Muslims. Senior advocate Salman Khurshid stated that the case was not limited merely to the issue of determination of essential practice, but it was also an issue of culture and privacy.

Background of the Karnataka hijab protests
The Supreme Court is hearing petitions challenging the Karnataka High Court’s order from March 2022 which upheld the government order banning students from wearing hijabs in educational institutions in the state. The High Court case was prompted by a petition filed by students of a government-run pre-university college in Udupi district of Karnataka, which disallowed Muslim girl students from entering their college classroom because they were wearing the hijab.
The issue, which began in January 2022, led to protests in several parts of the state at the start of February, with saffron shawl wearing students opposing their hijab wearing classmates. On February 5, 2022, the Karnataka government then went on to mandate a dress code, banning the wearing of clothes which disturb equality, integrity and public order in schools and colleges. This government order was challenged, with the Muslim girl students arguing in court that wearing the hijab was part of their faith and it was their fundamental right to do so. But the Karnataka High Court upheld the state government’s order banning the hijab in schools and colleges.
A full bench of the High Court comprising Chief Justice Ritu Raj Awasthi, Justice Krishna Dixit and Justice JM Khazi had held that wearing of hijab by Muslims was not an essential religious practice of Islam.

Explained: How the PFI originated and why there are calls to ban them

Nation can have lower tax rate only when tax payer base…