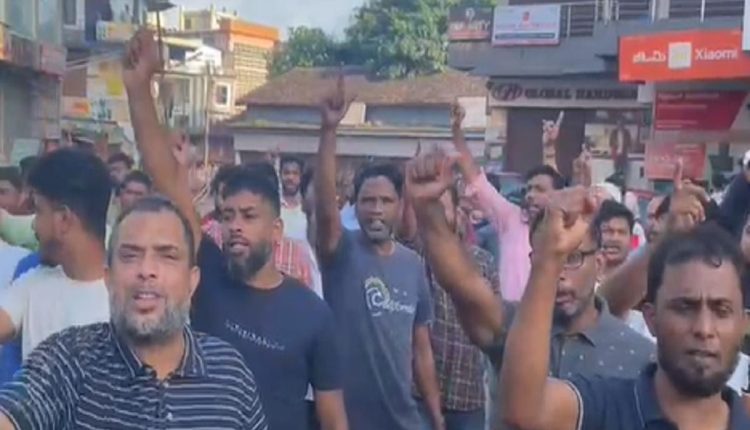 NIA Raids
The raids by NIA that began across India in the early hours of September 22, have led to huge protests by PFI workers and supporters.
TNM Staff

PFI protests in Dakshina Kannada district
Following nationwide raids of the National Investigation Agency (NIA) in the offices of Popular Front of India (PFI), Social Democratic Party of India (SDPI) and houses of their leaders, protests have mounted across the country. The raids took place early hours of Thursday September 22 in around 40 places in the states of Kerala, Tamil Nadu, Uttar Pradesh, Andhra Pradesh, Telangana, Karnataka, Delhi and Bihar.
As per reports, raids are being carried out at around 50 centres in Kerala. Raids were conducted at houses of state leaders like OMA Salam, Ashraf Moulavi and others. Some digital files are said to have been seized from the house of Ashraf Moulavi, in Poonthura of Thiruvananthapuram. The raids commenced around 3 am at his house and soon workers gathered outside the residence and started shouting slogans. The raids have led to huge protests in Thiruvananthapuram Kozhikode and Malappuram districts as crowds gathered outside the offices and leaders’ houses subjected to the raids.
In Kasaragod district of Kerala, the raids began at the SDPI district committee office in Perumbada and some of the leaders’ houses around 5 am. A large number of PFI workers protested outside shouting slogans once news about the raids began to spread.  As the number of protesters increased at a steady pace, the police warned them that they would be taking measures to remove them from the place.
Similarly, PFI workers have been protesting in various parts of Tamil Nadu. A huge number of PFI workers gathered outside the house of National Executive Committee members of Popular Front of India (USIP) in Nelpet area of ​​Madurai, which was raided by NIA officials. Protests were also seen outside Chennai head office, Trichy, Coimbatore, Karaikal of Puducherry and Thanjavur.
In Andhra Pradesh’s Kurnool, the residence of SDPI Andhra President Abdul Waris, was raided at 3 am. According to his aides, his house in Hyderabad too was subjected to search by NIA officials. Locals surrounded the house and the officials had to face the ire of the locals who shouted slogans against them. In many of the places where the NIA conducted searches, they were accompanied by considerable police presence, to discourage protesters.
Protests also erupted in Bengaluru after several houses of PFI leaders were raided. NIA officers knocked on the house of Anis Ahmed, who is the general secretary of PFI at 6 am. Anis’s residence was raided by 15 NIA officials after which, more than 100 PFI activists protested in front of his apartment. Raids were also conducted at residences of other leaders of PFI such as Mohammed Saqib who is the national secretary, Afsar Pasha, secretary for PFI and Nasir Pasha, the state president for Karnataka.
The raids in Dakshina Kannada district in Karnataka began at 4 am in eight different locations. NIA cracked down at Mangaluru’s SDPI and PFI office on Nellikai road, along with residences of SDPI leaders. In response to the raids, the Nellikai road has been closed off and PFI members have taken to the streets in protest.
“The raids conducted by the NIA and ED at the residences of the Popular Front leaders of the state is the latest example of state-sponsored terrorism. The raids were conducted at the houses of national, state and local leaders. They are being conducted at state committee offices too. There should be strong protest against the moves of the fascist government to silence the voices of difference using the agencies,” A Abdul Sattar PFI Kerala State General Secretary said in a statement.