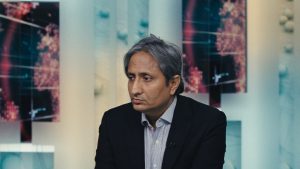 A newsroom thriller by award-winning filmmaker Vinay Shukla is a newsroom drama featuring Ravish Kumar has won the ‘Amplify Voices Award’ at the film festival. The film that received a great response from the audience intimately chronicles the working days of broadcast journalist Ravish Kumar, as he navigates a world of truth and disinformation.

Ravish Kumar is an Indian journalist, author, and a prominent media personality. He is the Senior Executive Editor of NDTV India, and hosts the channel’s flagship weekday show ‘Prime Time’.

The 94 mins documentary in Hindi-English language is a UK production.  The film is titled ‘NAMASKAR! MAIN RAVISH KUMAR’ in Hindi. At the centre of the film is veteran reporter Ravish Kumar of India’s NDTV who strives to uphold standards of independence and accountability. But every day, he faces a new set of challenges: budget cuts, staff departures, mysterious obstructions and even death threats.

The film received standing ovations at the end of each screening at TIFF.