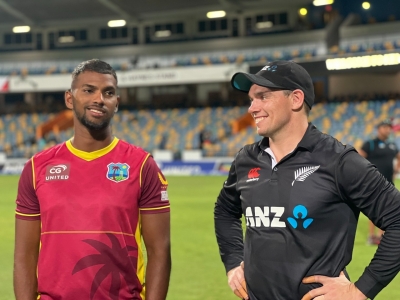 Bridgetown (Barbados), Aug 20 (IANS) New Zealand pace bowlers Tim Southee and Trent Boult shared seven wickets among themselves as the visitors thrashed West Indies by 50 runs in a rain-curtailed second ODI at the Kensington Oval to level the series 1-1 on Saturday (IST).

After Black Caps opener Finn Allen had anchored the innings with a polished 96 to take the visitors to a competitive 212 off 48.2 overs batting first on a difficult pitch, Southee and Bolt claimed four and three wickets respectively as the home side slumped to 63/7 in 22.4 overs when a second downpour resulted in a prolonged delay to the day/night fixture.

Set a revised target of 212 off 41 overs under the D/L method, Yannic Cariah’s 52 in his debut One-dayer innings and a quick 49 (31 balls) by Alzarri Joseph gave New Zealand the jitters with an 85-run ninth-wicket stand.

However stand-in skipper Tom Latham called upon Southee and he responded by getting the better of Joseph, while Allen completed a superb boundary catch to end Cariah’s effort as the West Indies were dismissed for 161 off 35.3 overs.

The series decider will be played at the same venue on Sunday.

Man of the match Finn Allen said he had enjoyed playing on the challenging wicket. “I’ve always known I’ve got the grit in me but I never showed it. Showing now that I can do it is good,” Allen was quoted as saying by supersport.com.

“The wickets haven’t been batting-friendly but I have enjoyed the challenge,” added Allen.

“It’s disappointing to lose so many wickets in the powerplay,” said West Indies captain Nicholas Pooran in reflecting on the opening period of his team’s reply when they slumped to 27/6. “Just one good partnership in the top order might have been enough to see us home.”

Paras Kalnawat opens up about being part of ‘Jhalak…

Sobhita Dhulipala wraps up her parts in ‘The Night…