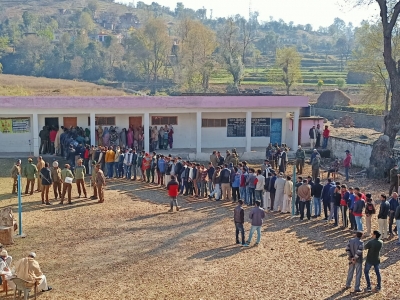 Srinagar/New Delhi, Aug 20 (IANS) The arrival of real democracy in ‘Naya Jammu and Kashmir’ has turned the heat on Kashmir-based parties. “Anyone living ordinarily” in the Himalayan region can cast his vote and elect his representative, which seems unacceptable to the politicians who existed for three decades due to poll boycott politics sponsored by Pakistan-backed separatists and militants.

Traditional political parties like National Conference, Peoples Democratic Party and others till August 5, 2019 when the Centre announced its decision to abrogate Jammu and Kashmir’s special status and bifurcated it into two union territories, used to win elections due to low polling percentage. But now, they won’t find it easy as the people would participate in elections without any fear, threat and intimidation.

The polls in Jammu and Kashmir after 1990 when the Pakistan sponsored terrorism broke out, were marred by the boycott calls given by the separatists and the ultras. Electorate used to stay away from the polling booths as they feared for their lives. However, during the past three years the situation has changed. The common man in the Himalayan region is no more scared of bullets, bombs and grenades as he is reaping the fruits of real democracy.

Huge participation of people in the District Development Council (DDC) elections in December 2020, the maiden democratic exercise after the abrogation of Article 370, drove home a point that the era of boycott politics has ended and only deserving politicians will get a chance to represent the masses.

It was for the first time in 70-years that Non Permanent Residents (NPRs) got a chance to cast their vote in any local elections like DDC polls. NPRs like West Pakistan Refugees (WPRs) till 2019 were ineligible to contest and vote in assembly and local body elections.Before 2019, WPRs were Indian citizens, who were eligible to vote in Parliamentary polls, but not considered permanent residents of the erstwhile J&K State and couldn’t exercise their franchise in the assembly or any other local elections.

Lakhs of people from other places of the country like Valmikiis, who have been living in J&K for decades and have turned the Himalayan region into their permanent home, were ineligible to take part in any local elections till the special status was in vogue. Revocation of the Article 370 implemented the Right to Equality in J&K.

Anybody living ordinarily in J&K can vote

Recently, J&K Chief Electoral Officer (CEO) Hirdesh Kumar while addressing a news conference stated that after the abrogation of Article 370, Representation of People Act 1950 and 1951 has become applicable in the Union Territory. It allows “ordinarily residing person” to get registered in electoral rolls of J&K, provided he or she gets the name deleted from the electoral roll of his or her native constituency. “Anybody living ordinarily” in J&K can take part in the electoral process.

Kumar’s statement provided an opportunity to Kashmir based leaders to grind their axe by claiming that the voters will be brought from outside to tilt the balance. They made an attempt to spread unfounded fears among masses and created an unnecessary controversy through propaganda by twisting facts.

There was nothing surprising in Kumar’s announcement that non-locals ordinarily residing in Jammu and Kashmir can vote. After abrogation of Article 370, all central laws are applicable in the Himalayan region. According to new laws, those who could not vote earlier due to special status, can vote now.

Prior to the abrogation of Article 370, those ordinarily residing in J&K were eligible to get registered in electoral rolls. They were categorised as Non-Permanent Resident (NPR) voters. During the last Parliamentary elections there were approximately 32,000 NPR voters in J&K.

The Kashmi- based leaders are once again trying to create a fake narrative by propagating that democratic rights of J&K natives are being snatched and anyone now can become a voter. They are giving press conferences, organising protests and giving statements just to make their presence felt and mislead the people. Their claims that bogus voters will be brought to J&K are nothing but a fake propaganda.

According to the rules for getting registered in the electoral roll an eligible person has to fill Form-6, which contains complete details of the applicant including his family trail.

There are specified documents prescribed by the Commission which are to be submitted as proof of residence as well as proof of age. On receipt of any such documents along with requisite documents, a Booth Level Officer, BLO (who happens to be a local officer of the polling area), is appointed by the Electoral Registration Officer(ERO), who conducts a detailed physical verification of the particulars mentioned in the Form 6, and submits his report. It is based on the documents as well as the report of the BLO, the concerned ERO, if satisfied, grants registration to an applicant.

Further, as a counter-check, there is also a provision in law to object to the inclusion of any name in the electoral roll through Form-7, by any elector of the concerned constituency. There is a complete mechanism in place to prevent any bogus voter from getting registered.

Concerns raised by the traditional politicians in Kashmir are aimed at gaining some sympathy so that they can at least win a few assembly seats. They are aware of the fact that Kashmir’s political scenario has changed completely during the past three years and nothing is going to be easy.

Separatists, who used to help the mainstream leaders by issuing boycott calls, don’t exist in J&K anymore as they have been shown their right place. Overwhelming participation of the natives in 2020 DDC polls was a precursor to assembly elections witnessing a huge voter turnout.

Leaders, who sold dreams like autonomy, self-rule and azadi, have been left with nothing to sell. They are raising the bogey of democratic rights of J&K people being snatched to coin a new slogan to woo the voters.

According to the officials they are anticipating an increase in the number of electors after the completion of the Special Summary Role. The last revision in J&K was held with reference to January 1, 2019 as the qualifying date. Thus the youth who have attained 18 years of age after January 1, 2019 are expected to be registered in the electoral roll along with other left out persons. Based on the population projections, the projected the over 18 population in J&K as on July 1, 2022 is expected to be 98,96,000, whereas the registered electors in the in the Himalayan region as on date are only 76,02,397, thus there is a gap of 22,93,603 and this gap is to be filled after revision is completed.

There already exists a provision for the members of armed forces, including Army, BSF, CRPF, ITBP and others, to get registered as service voters for their native assembly constituency and avail the facility of Electronically Transferred Postal Ballot System (ETPBS). However, for the Armed Forces personnel who are posted at Peace Stations there is an additional option available to get registered as a general elector at the peace station. There are not many peace stations in J&K as Armed Forces Special Powers Act (AFSPA) is still prevalent in maximum districts of the Union Territory.

Facts and figures prove beyond doubt that Kashmir based traditional leaders are just playing politics over a non-issue. It seems they have realized when people come out to vote in large numbers then their chances could be bleak and they can end up on the losing side.

Common residents of J&K haven’t shown any interest in the narrative which politicians are trying to build. After August 5, 2019, the J&K people have endorsed all the decisions of the Centre and are happy with the positive moves that have been made to benefit them.

During the past three years they have come to know what good governance means and in the next phase they are going to taste the fruits of real democracy as they would elect the leaders, who will become their true voice and would represent them at every forum.