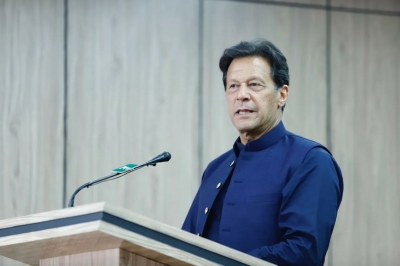 Islamabad, Aug 20 (IANS) Pakistan’s Federal Investigation Agency (FIA) has decided to arrest former Prime Minister Imran Khan if he fails to appear before the investigation committee or respond to the notices concerning the prohibited funding case, according to sources.

The agency will get permission from a court of law to arrest Khan to get details of the party funds and accounts, The News reported.

“The final decision to arrest the PTI chief could be taken after issuing three notices,” the sources maintained.

The FIA issued the second notice to Khan on Friday.

The former premier received the first notice on August 10 but refused to appear before the FIA investigation team to provide details of the party funds and accounts, The News reported.

The sources disclosed that five more PTI companies had been traced which were not mentioned in the reports submitted to the Election Commission of Pakistan (ECP) and FBR.

These companies are operating in the US, Australia, Canada, the UK and Belgium, they said, adding that the FIA had collected their audit reports, The News reported.

The FIA Banking Circle has repeatedly asked the PTI chief to provide details of the bank accounts but Khan, responding through his legal counsel, said he was neither answerable to the FIA nor could it compel him to provide any information, the sources said.

They added that the PTI chief had threatened the FIA with taking a legal action if the notice was not withdrawn within two days.

“The FIA committee has collected enough evidences to prove Imran guilty of hiding the factual position from the ECP,” the sources said, adding that the third and probably the final notice would be issued next week well before the end of August.

An era ends: No Advani speech at BJP national executive