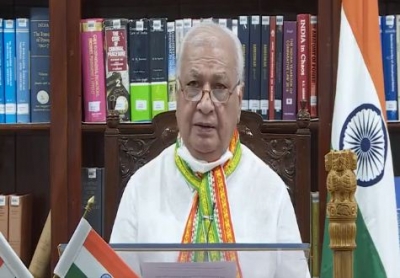 Ever since alleged irregularity in the appointment of Priya Varghese as the Associate Professor in the Kannur University surfaced, Khan has been taking on the university authorities and the ruling Left government in the state.

Priya is the wife of former CPI-M Rajya Sabha member K.K.Raghesh, who is presently the private secretary to Chief Minister Pinarayi Vijayan.

“He (VC) has gone all-out to please the party in power. Now, it’s an open secret that other candidates with higher marks were sidelined to accommodate Priya,” Khan told the media.

Incidentally, the interview to select Priya was held last year a few days before Ravindran was to retire. Soon after the interview, Ravindran got an extension, which is a rarity.

He went on to add: “We need to put a break on this as people’s money cannot be spent like this,” he asserted.

“Starting from the lowest post to the highest, appointments are being made to Universities and I will soon launch a full fledged inquiry into this,” said Khan who seems to be in no mood to relent.

Khan’s insistence can also spell trouble to the wife of two-time former Lok Sabha member P.K.Biju, who has got a teaching job in Kerala University.

The appointment of the wife of the present State Industries Minister and former Rajya Sabha member P.Rajiv, at the Cochin University, also might get a re-look.

So all in all, it could spell more trouble for Vijayan, who surprisingly till date has maintained a silence, despite Khan going hammer and tongs against the present CPI-M government and their ways.

Meanwhile, the Congress-led opposition is in glee, as their job appears to have now been taken up by Khan and now all eyes are on the 10-day special Assembly session beginning on Monday.