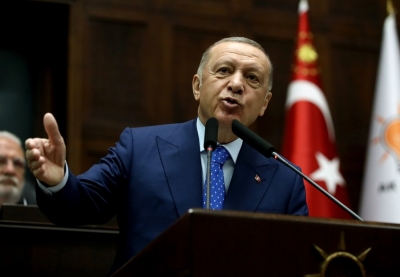 Ankara, Aug 20 (IANS) Turkish President Recep Tayyip Erdogan has called for reconciliation between the government and opposition in neighbouring Syria.

“The opposition and the regime in Syria need to reconcile,” Erdogan said in comments carried by state news agency Anadolu on Friday.

Turkey’s goal in Syria “is not to defeat Assad” but to find a political solution, Erdogan said, adding that states “can never rule out political dialogue or diplomacy”.

He was speaking to reporters on a return flight from Ukraine’s Lviv where he met President Volodymyr Zelensky and UN Secretary-General Antonio Guterres.

Observers suggest the Turkish leader may be weighing a resumption of dialogue with Assad.

Turkey controls pockets of land in northern Syria following military operations against the Syrian Kurdish militia whom it considers terrorists.

Erdogan recently threatened to expand the offensive there.

He suggested “further steps with Syria” will also help ease the burden of “4 million” refugees from Syria in Turkey.

Turkish opposition parties have vowed to send Syrians back home if they win the elections next year, amid a high level of resentment towards refugees in Turkey.

However, it is unclear how and when any plans to relocate refugees might work.

Erdogan’s call came as at least 14 people, including five children, were killed and 38 others were injured in the shelling of a market in an area controlled by Turkish-backed rebels in northern Syria, a war monitor said.

‘Naughty boys’ fell to bullets, Sitalkuchi can be repeated:…