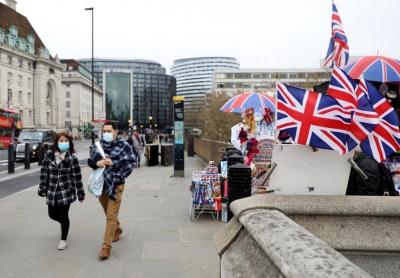 London, Aug 20 (IANS) Covid-19 cases in Britain have fallen to their lowest level in two months, revealing a fresh evidence that the current wave of the virus is receding, figures show.

The number of patients in hospital with the virus is also continuing to drop, though health experts warned infections are likely to rise again in the autumn and winter, reports dpa news agency.

A new booster jab will be offered to everyone in the UK aged 50 and over from next month, as well as those with underlying health conditions, to increase protection ahead of the future waves of the virus.

A total of 1.7 million people in private households are estimated to have had Covid-19 in the week to August 8, according to the Office for National Statistics (ONS).

This is a drop of 34 per cent from the previous estimate of 2.6 million for the week ending July 26.

On Friday, Sarah Crofts, head of analytical outputs for the ONS Covid-19 infection survey, said: “Infections have continued to fall across much of the UK to levels last seen in mid-June.

“Our latest data show these decreases are among nearly all ages in England, with the lowest levels seen among children. “We will continue to monitor the data closely to understand the impact of the summer holidays.”

The current wave has been driven by the Omicron BA.4 and BA.5 subvariants of the virus and saw weekly infections climb as high as 3.8 million in early July.

This was not as steep as the record 4.9 million infections at the peak of the Omicron BA.2 wave in late March, however.

Some 1.4 million people in England were likely to have tested positive for Covid-19 in the most recent week of the survey, the equivalent of around one in 40, the ONS said.

The autumn booster campaign is set to begin in England in the week of September 5, when NHS staff will start vaccinating care home residents and people who are housebound.

A national booking service will also open that week, inviting over-75s and people susceptible to serious illness to choose an appointment.

Big B ‘disappointed’ with no ‘grand’…

So much stigma attached to sexual crime: Richa Chadha