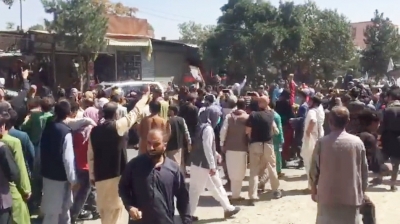 Islamabad, Aug 20 (IANS) Protests against the strengthening of the Taliban erupted in the border region between Pakistan and Afghanistan.

The protesters on Friday called on the Islamabad government to take stronger action against attempts by the Taliban who control Afghanistan to seize Pakistan’s North Waziristan region, reports dpa news agency.

A Taliban spokesman called the protests “sabotage” and “financed by the West”.

Protesters blocked a main road connecting the region to the rest of the country, according to local police.

They raised black flags against the Taliban on their rooftops.

Protests have already taken place in the Swat region, near North Waziristan.

Swat is home to Nobel Peace Prize laureate Malala Yousafzai, who narrowly survived an assassination attempt by the Taliban in 2012 after campaigning for education for women and girls.