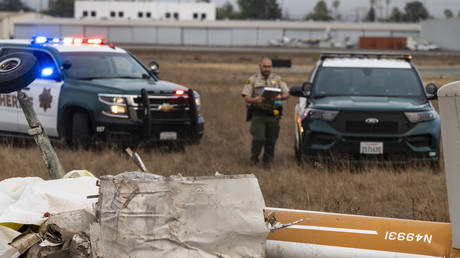 A midair collision over a small airstrip in California has killed multiple people, with officials saying the crash took place at a low altitude as two planes attempted to land simultaneously.

An official account of the city of Watsonville, California noted the incident in a tweet on Thursday, stating there were reports of “multiple fatalities” at Watsonville Municipal Airport “after 2 planes attempting to land collided.” It also shared an image of a structure at the airfield which sustained major damage in the crash.

The city later offered its condolences to the victims and their families, saying the tragic incident “took the lives of several people.”

At least two people were killed in the collision, which involved a twin-engine Cessna 340 and a single-engine Cessna 152, according to officials cited by the Associated Press.

Multiple agencies responded to Watsonville Municipal Airport after 2 planes attempting to land collided. We have reports of multiple fatalities.

Both people aboard the Cessna 340 lost their lives, though the outlet added it was “not immediately clear” whether the pilot of the other craft, its sole occupant, survived. No injuries were reported on the ground, despite the damage at the airport.

Footage captured by local media showed the wreckage of one plane in a field, while the other craft could be seen among the ruins of the structure that was hit, having smashed through one of its walls.

Multiple fatalities after mid-air plane crash at Watsonville airport. @nbcbayarea #SkyRanger over the scene. City officials say it happened as the 2 planes were trying to land around 3 pm. https://t.co/H9PGSIuP6K pic.twitter.com/DfIAQuHPdX

The Federal Aviation Administration and National Transportation Safety Board have said they are investigating the crash, and the FAA confirmed that both planes were preparing to land when the collision occurred. So far, few other details have been provided, and the exact cause of the smash-up remains unclear.

Speaking to a local newspaper, a witness to the incident said the planes were only about 200 feet off the ground when they met, adding that he saw one of the aircraft hit the right wing of the other, which “just spiraled down and crashed” around the perimeter of the airfield. He said the twin-engine plane “was struggling” and still in the air afterward, but soon crashed down into a building at the facility and erupted into flames.

A city-owned airstrip with four runways, the Watsonville Municipal Airport does not have an air traffic control tower to help planes coordinate landings and take-offs, according to the AP. The site is often used by recreational pilots flying smaller aircraft such as the two Cessnas involved in Thursday’s collision.

PHOTOS: Nayanthara and Vignesh Shivan make for a perfect couple in white as they take over Valencia streets

AAP’s remarks against L-G ‘defamatory’, made to tarnish his reputation: Delhi HC

Rupee ends marginally up, but remains near record low

Security of army bases, govt offices scaled up in Uri after…