Sara Ali Khan looks stunning in black crop-top and shorts as she gets spotted at a studio in the city; PICS 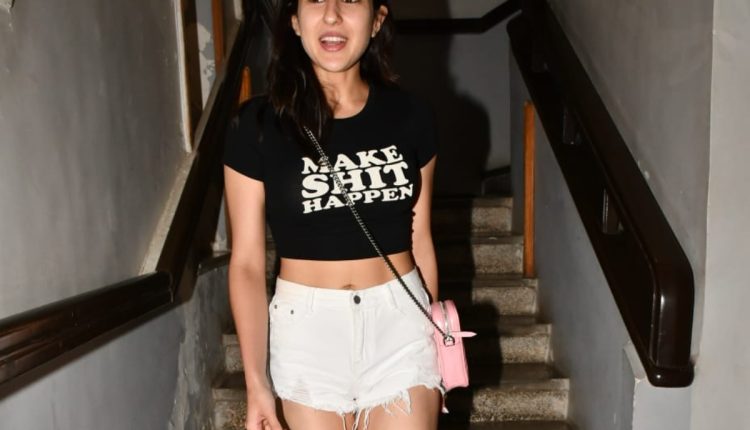 Sara Ali Khan is one of the most promising upcoming actresses in the Indian Film Industry. She has been a part of movies like Kedarnath, Love Aaj Kal, Atrangi Re and Simmba. She enjoys a massive following on social media and keeps gracing her followers and admirers with pictures of her. Apart from movies, she loves to travel and her followers are graced with her travel photos and videos regularly. The actress returned from her USA trip recently and was spotted at Krome Studios in Mumbai yesterday night.

Sara Ali Khan was spotted at Krome Studios in Mumbai yesterday night. The actress wore a black crop top with the caption, ‘Make Shit Happen’ and white shorts. She looked very happy as she headed out of the studio. The Simmba actress graced the paparazzi with photos of her. She smiled into the camera and gave the shutterbugs exactly what they wanted. Post that, she headed to her car, sat in it and left the spot.

Have a look at Sara Ali Khan getting spotted outside a studio in Mumbai:

On the work front, Sara Ali Khan, who was last seen in Atrangi Re with Dhanush and Akshay Kumar, is working on a film with Vikrant Massey titled Gaslight and an untitled film with Vicky Kaushal. Her brother Ibrahim Ali Khan has been assisting Karan Johar on his next directorial Rocky Aur Rani Ki Prem Kahani with Ranveer Singh and Alia Bhatt. The shoot of the film has been wrapped and post production work on the same is going on, as it gears up for a theatrical release next year. Her father Saif Ali Khan will be seen in Vikram Vedha alongside Hrithik Roshan and Adipurush, alongside Prabhas and Kriti Sanon.

Also read: Sara Ali Khan on working with Vicky Kaushal in Laxman Utekar’s film: It was lot of fun, he’s a talented guy

People’s love for Prime Minister rising, not for…