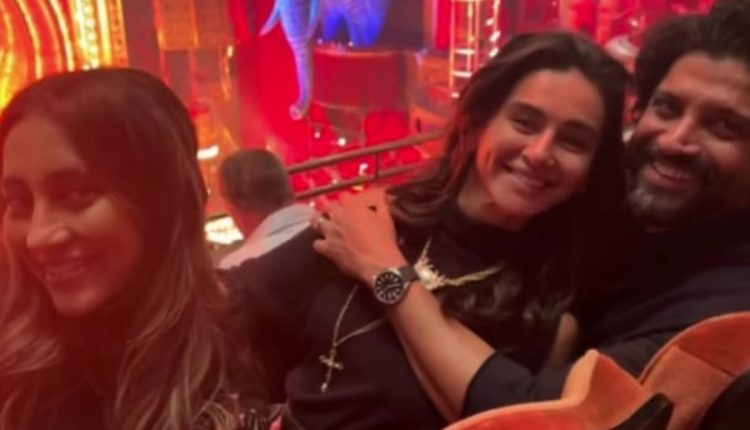 Shibani Dandekar and Farhan Akhtar are one of the most loved Bollywood couples. The couple got married this year and grabbed all the eyeballs with their lovely pictures from a dreamy wedding. These two never hesitate in expressing their love on social media and often can be seen praising each other. They enjoy a massive fan following on social media and every now and then, share adorable photos with their loved ones on Instagram.
However, this time, they are in the news as their sweet selfie got photobombed by the cutest photobomber Anusha Dandekar, sister of Shibani Dandekar. While sharing the post, Farhan wrote, “The video says it all”. Anusha commented, “Hahaha you guys are soooo mean”. Actress Priyanka Chopra too liked the post. Their fans also rushed to drop sweet comments.
Check Farhan Akhtar’s video here
Meanwhile, Farhan Akhtar is set to return to direction after a decade with Jee Le Zaraa with Priyanka Chopra, Katrina Kaif, and Alia Bhatt. The movie was announced last year and came with the tagline  ‘About time the girls took the car out.’  Later, Farhan took to Twitter and wrote, “Did someone say road trip? Thrilled to announce my next film as director and what better day than 20 years of Dil Chahta Hai to do it. #JeeLeZaraa with @priyankachopra #KatrinaKaif  @aliaa08 I cannot wait to get this show on the road”. Penned by Zoya Akhtar, Reema Kagti and Farhan, Jee Le Zaraa is expected to hit the screens next year.
ALSO READ: Farhan Akhtar calls Laal Singh Chaddha ‘beautiful’; Says ‘Not easy to live up to a classic like Forrest Gump’

Sara Ali Khan looks stunning in black crop-top and shorts as she gets spotted at a studio in the city; PICS

Petrol, diesel, LPG likely to be costlier by May