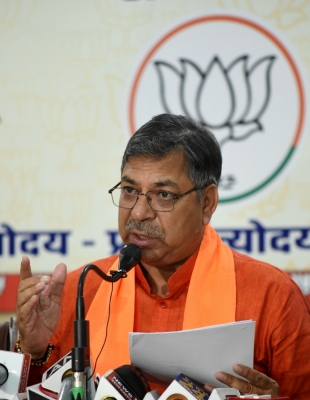 Jaipur, Aug 19 (IANS) In the wake of rising incidents of crime and anarchy, the BJP will stage a major protest in Jaipur on August 20 against issues like atrocities on women and saints, illegal mining, mob lynching, attacks on Hindus and other crime incidents.

Rajasthan BJP President Satish Poonia has said, “It is the misfortune of Rajasthan that the Congress government has not appointed any full-time Home Minister in three and a half years.”

“Had the Chief Minister brought in some reforms, there would have been no complaint, but looking at the circumstances, it seems that the Chief Minister is not concerned with the safety of the people of Rajasthan but rather with his chair,” Poonia added.

More than seven lakh crime cases have been registered in Rajasthan during the last three and a half years, of which 6,325 cases of murder have took place. More than 5,000 cases of looting have been reported while theft incidents have gone up to more than one lakh and nearly 1.45 lakh cases of atrocities against women have been reported.

Poonia added that the law and order situation in Rajasthan has deteriorated.

People from the SC and ST communities have been oppressed and harassed the most during the current Congress government in Rajasthan, he said.

A saint self-immolated himself on Thursday after he was pressured to vacate a temple, a female teacher was burnt alive in front of her six-year-old son early Thursday morning and a nine-year-old Dalit boy was thrashed by his school teacher, who died allegedly for touching a water pot belonging to the latter.

Recently, a saint self-immolated and died while protesting against illegal mining.

On early Wednesday morning, a man was lynched allegedly by a mob in Alwar on suspicion of theft.

‘All options open, including joining the BJP’: RCP Singh

Don’t ally with US, says CPI-M

Injured Salah travels to Spain for treatment ahead of World…

Delhi likely to get 2 stations under 3 proposed Bullet train…