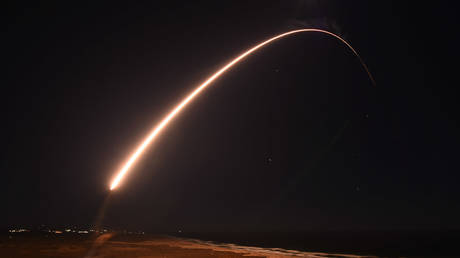 The US Air Force test-launched an unarmed Minuteman III intercontinental ballistic missile (ICBM) over the South Pacific on Tuesday. Described by the Pentagon as a demonstration of the “lethality and effectiveness” of America’s nuclear weapons, the test had previously been delayed due to ongoing tensions with Russia and China.

The missile, which is capable of carrying a 350-kiloton W-78 nuclear warhead, blasted off from Vandenberg Space Force in California shortly after midnight. After a 4,200-mile (6,700-km) journey across the Pacific Ocean, its re-entry vehicle – which in this case carried conventional explosives rather than an atomic warhead – detonated and hit the water near Kwajalein Atoll in the Marshall Islands.

Tuesday’s test took place at a time of heightened geopolitical tensions between the US and rival nuclear powers Russia and China. Washington is engaged in what Moscow views as a “war by proxy” against Russian forces in Ukraine, while the Chinese military has held large-scale military exercises near Taiwan since US House Speaker Nancy Pelosi visited the island earlier this month.

The US keeps reneging on arms control agreements, so why should Russia trust Joe Biden’s latest overtures?

China’s exercises involved the firing of 11 ballistic missiles into waters near Taiwan. Chinese state media reported that the missiles used may have been Dongfeng DF-17 medium-range missiles, each capable of carrying a hypersonic warhead.

Only one major arms-control agreement between the US and Russia, the New START treaty, remains in force. Russia temporarily suspended US inspections of its nuclear sites under this agreement last week, stating that Western sanctions have prevented its inspectors from performing reciprocal visits to American sites.

Despite the tense climate, the Pentagon insisted that Tuesday’s launch was not intended to provoke any of the US’ adversaries.

“Our test launches are scheduled well in advance and are not reactionary to world events,” said Air Force Maj. Armand Wong. The Air Force also stressed that the US has conducted more than 300 such tests before, and that preparation for a launch begins up to a year prior to blast-off.

The last Minuteman III test took place in August 2021. The latest test was originally scheduled for March but was canceled when Russian President Vladimir Putin placed his country’s deterrence forces – both nuclear and conventional – on high alert shortly after launching Russia’s military operation in Ukraine.

“We have to be mindful that Russia’s a nuclear power,” then-Pentagon spokesman John Kirby said at the time. “And so as we make these decisions, it would be irresponsible for us not to think about making sure we don’t escalate this conflict any bigger than it already is.”

The launch had been pushed back earlier this month amid China’s exercises, with a US official telling the Wall Street Journal that the test was being “postponed to remove any misunderstandings given [China’s] actions around Taiwan.”

I go to award ceremonies for award or money: KJo

Legal profession yet to welcome women into its fold: CJI NV…