Taapsee Pannu Breaks Silence On Her Ugly Spat With Paparazzi At A Public Event, Slams Paps For Making Celebs Look ‘Ill-Tempered’: “We Are Not Illiterates To…” 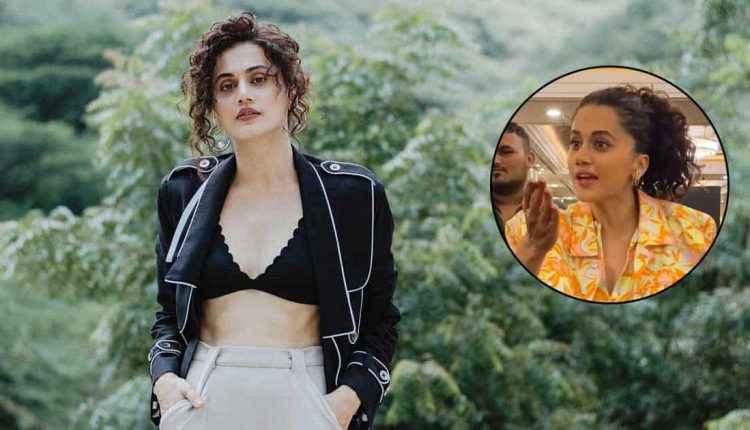 A couple of days back, Taapsee Pannu was seen getting into heated argument with paparazzi at a public event. It so happened when the actress arrived for Dobaaraa promotions and was seen making her way towards the promotional interviews. Soon after she tried to make it quick with paps and trying to leave early, a paparazzo slammed the actress for not respecting their time and efforts as they waited for her.

What left social media buzzing was Taapsee’s statement towards the end of the spat when she was heard saying, “actor hamesha galat hota hai.”

Now for the first time, Taapsee Pannu has broken her silence on the ugly spat and slammed paps for demeaning her and being rude to her. In her latest interview, she said that at time paps forget that there’s a ‘very thin line between being a public figure and public property.’

Vikram Vedha Trailer Not Releasing With Aamir Khan’s Laal Singh Chaddha Has More Than One Reason! Makers Want To Unveil It All Guns Blazing?
Kartik Aaryan Receives Massive Backlash For His ‘Casual Attire & Improper Salute’ During The I-Day Celebration With Indian Navy, Netizen Say “They Think They Are Demi Gods”

Speaking about the same she told Bollywood Hungama, “I never call them for my personal publicity. They are invited by the production houses. That’s why there were there for an event for Dobaaraa.” As an individual, she objects to being bullied by the photographers. “You should hear the tone in which they sometimes speak. It is just so insulting to us. The way that gentleman spoke to me it seemed as though he was doing me a favour by clicking me. Even my parents don’t scold me in that tone. I don’t even know how to describe it to you. I was given a schedule to follow. I was doing that. Why should I be at the receiving end of this tone, as if I have committed a crime?!”

“My only crime was, I was on the other side of the camera. Lately with the social-media culture anyone with a camera or a phone is a paparazzi. The camera gives you a one-sided narrative. It is very easy in today’s day and age to target a person and demean that person by putting out one-sided videos,” added Taapsee Pannu.

The actress went on to add, “We are not morons .We are not illiterates to lose our cool on video without reason. I refuse to accept I was disrespectful to anyone. I was calm I kept smiling respectfully although that gentleman did not respect me at all. He kept making faces at me and he talked to me in a very derogatory tone. I did not want to retaliate. I folded my hands and accepted whatever he had to say.”

Taapse Pannu concluding saying that certain members of the paparazzi feel that because they’ve the power to put one-sided content on social media that makes celebs look ill-tempered.

“Sadly, they are the windows for the public to celebrities and hence there are a lot of people who misuse that power. I am as much a human being as anyone who is reading this interview. When spoken to rudely I have the full right to ask why I am being spoken to in that way. I did nothing wrong. We are all in the same industry. They need to respect me as much as I respect them. Just because we on this side of the camera it doesn’t mean only we need to behave politely,” added the Dobaaraa actress.

For more such updates stay tuned to Koimoi!

Must Read: Saif Ali Khan Once Revealed Getting As Much Pocket Money As “The Guy Next Door” & Nawab Being A Name Tag Only

The post Taapsee Pannu Breaks Silence On Her Ugly Spat With Paparazzi At A Public Event, Slams Paps For Making Celebs Look ‘Ill-Tempered’: “We Are Not Illiterates To…” appeared first on Koimoi.

Ex-NCB Officer Sameer Wankhede In A Viral Video Opens Up On Youngsters Doing Drugs In Front Of Parents, Netizens React, “Ask Him Why Did He Jail Aryan Khan With No Proof?”

Nia Sharma Oozes Hotness As She Raises Temperature With Her Bold Monochrome Pictures, Flaunts Her Toned Posterior In A Backless Monokini