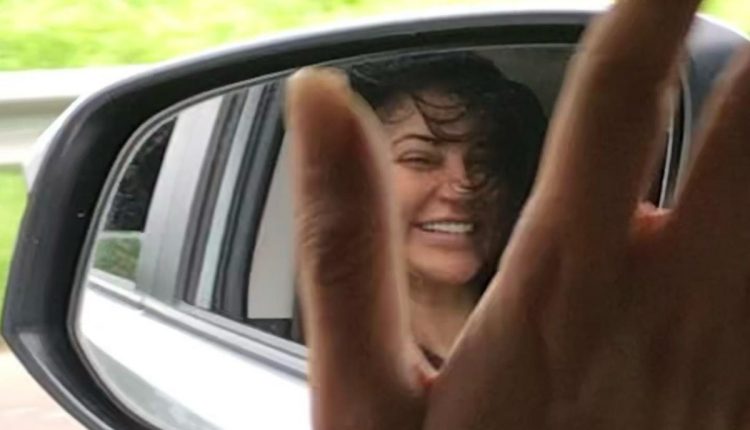 Sushmita Sen is the perfect combination of beauty and brains and is also known for her humility and kindness. The actress has always spread love and joy with her fans via her social media profiles, posting adorable moments with her daughters Renee and Alisah. Meanwhile, just a while ago, the former Miss Universe shared pictures of her enjoying Mumbai rains. Sharing the pictures on her Instagram handle, Sushmita wrote: “This girl loves the rains!!! This girl loves Aamchi Mumbai!!
#sharing #drivingthoughts #happyvibes #endlesspossibilities #raininghope #life I love you guys!!! #Duggadugga.”
In the photos, Sushmita can be seen adoring the rain from her car as she goes for a drive and clicks pictures in the rear-view mirror of her car. As soon as the actress posted the pictures, her fans rushed to the comment section to appreciate the Bengali beauty. “Me too. Love the rain and Love you… You inspire me,” a fan commented. Another fan wrote, “This girl is the reason why it showers so hard in Mumbai.” “And I admire this girl,” one more fan wrote.

Sushmita Sen has been making headlines since her association with the first chairman of the Indian Premier League Lalit Modi was made public. On July 14, Modi had shared pictures on social media talking about returning from a global tour with his “better looking partner” Sushmita Sen. When netizens surmised that Lalit Modi and Sushmita Sen are “married,” he issued another tweet to clear the air and wrote that the two are just dating, “not married.” “Just for clarity. Not married – just dating each other. That too it will happen one day,” his post read.

Sushmita entered the entertainment world after she won Miss India and Miss Universe pageants in 1994. She started her film career a couple of years later. She last appeared in the Disney+Hotstar series Aarya and received the Best Actor Female award at the Filmfare OTT Awards for her performance in the first season of the show.
ALSO READ: Sushmita Sen’s epic reply to reports of her adopting a third child is pure gold; SEE PIC

Shang-chi Actress Michelle Yeoh Feels Failure Is Necessary For Growth: “Our Slips & Stumbles Are The Secrets To Our Flight”

“Deepika Padukone & Ranveer Singh Are Meant To Last Forever, But Pregnancy News Will Have To Wait Till 2024”:…

Black Panther 2 Box Office Projections (Domestic): To Make Less Than Its Prequel But To Be The Biggest MCU Movie Of 2022

Two guerrillas gunned down in Kashmir